Support for Windows 10 version 1511 aka the November Update will be ending soon. Find out if you are running it and what your options are.

Since then, Microsoft has released four feature updates, with the next release expected in September, called the Fall Creators Update or version 1709. Users should expect each feature update to receive 18 months of support before Microsoft require users to be on a current release in order to continue receiving updates and support.

The update is not mandatory, but if you want to continue receiving security updates – a critical advantage of using Windows 10 – then you will want to upgrade. Access to the Windows Store is also an important part of running the latest versions of Windows 10. That said, not all users are enthused with the necessity to upgrade, because, as we have come to realize, Windows 10 upgrades can break apps and hardware drivers. In a support article, Microsoft provides details about when Windows 10 1511 will stop receiving security updates and steps users should take remain current:

After October 10, 2017, Windows 10 devices running version 1511 will no longer receive security and quality updates. Microsoft recommends updating devices to the latest version of Windows 10 by visiting the Windows Security page and selecting Verify you’re updated to manually update your device . For additional info, check out the Windows lifecycle fact sheet.

Since version 1511 was released in November 2015, Microsoft has released additional feature updates that build upon each other, delivering the newest features and more comprehensive security. Windows 10 was designed as a service, whereby feature updates are required a couple times a year. For most consumers, both quality and feature updates are delivered automatically according to their Windows Update settings. Source 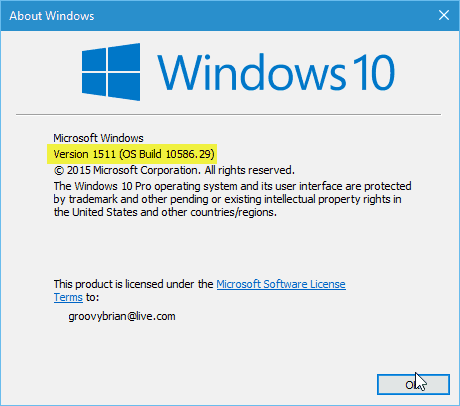 If you are using Windows 10 1511 within an organization, Microsoft terminated support at the end of July, so you should be on a supported release such as 1607 or 1703.

Windows 10 version 1511 end of service for Current Branch (CB) and Current Branch for Business (CBB) will occur on October 10, 2017. This applies to the following editions, which were released in November 2015:

This means, Windows 10 version 1511 will no longer receive security updates after the October update. Customers are encouraged to update to the latest CB and CBB to remain supported. There is no impact to other editions. Source

Users can find out which version of Windows 10 they are running by opening Start > Settings > System > About. The most recent cumulative update released for version 1511 according to the Windows Update History page is 10586.1045 on August 8th, 2017.

Some users will have no choice but to keep using 1511 if an important app or driver depends on it. Recently, Microsoft confirmed Intel Clover Trail processors will not support Windows 10 1703 and later releases, leaving those devices stuck on version 1607 with support until January 2023. If you are not between a rock and hard place though, definitely follow our guide and upgrade soon.

Also, if you want to learn more about how Windows 10 servicing works, check out our Windows Lifecycle article for details.