So what does that mean?

When people start talking about trillions of dollars, my mind starts to fog over. Trillion is a hard concept for me to wrap my head around. If someone said that a stack of 1.3 trillion one-dollar bills would reach to the moon, I’d believe that. And if someone told me a stack of 1.3 trillion one-dollar bill would reach to Mars, I’d accept that too. Both are equally beyond my range of comprehension.

So let’s try comparing the money we lavish on mobile goodies to something more familiar. How about the amount of money the U.S. owes China? That’s something innumerate politicians and citizens like to rant about. And you can see it right below in a pie chart with the portion of China’s hand in the U.S. pocket depicted, naturally, in red. 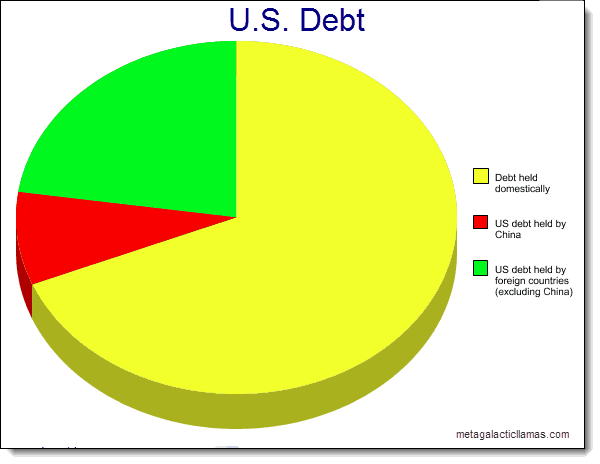 With a national debt of about $15 trillion, our national obsession with mobile electronics comes to about 8.5 percent of the debt.  If you make pie slice equal to 8.5 percent and place in the first pie chart, you get something like this:

Now compare it to the amount we owe China. Kind of dwarfs the idea of the Chinese pawn shop boogeyman, doesn’t it. Why there’s even enough left over to pay off Brazil and Luxembourg.

Actually, when you think about, we could pay of the entire foreign debt if patriotic Americans would take what they would otherwise spend on mobile–

Never mind…. I don’t know what I was thinking.