Running Ubuntu on your Android smartphone will soon be a reality. You’ll be able to dock your smartphone and use it as a full desktop operating system. Read more about this development and watch a video of Ubuntu for Android in action.

Does the title seem strange? It may well be, but it will become reality soon enough. I’ve always agreed to the idea that the smartphone is the future desktop, as hardware specs become more powerful. It seems that Ubuntu founder Mark Shuttleworth also agrees to this. 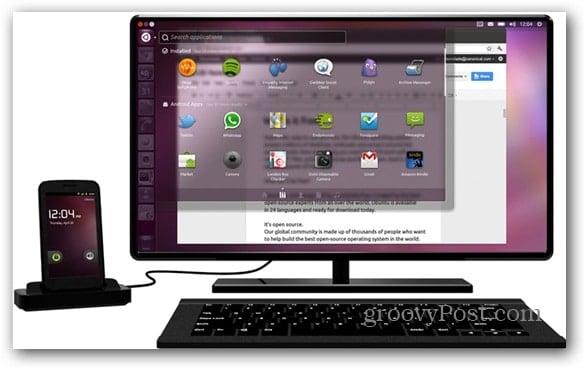 The latest smartphones already dual core CPUs and quad-core smartphones are right around the corner. Such processing power can be used to run a desktop environment without any problems.

The future is one in which you’ll just dock your smartphone, and all you’ll need is a keyboard, mouse and monitor to run your operating system, no matter where you are.

Similar solutions are already on the market. Just think about the dock the Motorola Atrix has. It turns the smartphone into a pseudo laptop.

Now, that sounds alright and all, but a complete desktop environment sounds even better, because a mobile OS is a mobile OS. It’s not built with desktop functionality in mind. Here’s where Ubuntu comes in. The folks making what’s probably the most popular open-source desktop operating system at the moment have thought of a way of running it straight from an Android phone that’s docked in a, well, dock.

It uses the same kernel Android does and the specs it needs are of a beefy Android smartphone: a dual-core 1 GHz CPU, video acceleration, HDMI video out, USB host mode, 512 MB of RAM, as well 2 GB storage for the image. The smartphone should use at least Android Gingerbread (version 2.3).

What you get is a full desktop environment, with a browser (Firefox and Chromium are supported and the fact that all bookmarks are in one place seems quite appealing), multimedia and music player, Google Docs and Calendar, Thunderbird for email and PiTiVi for editing and watching video.

Social networking, as well as phone contacts and functions (calendar, messaging a.o.) work together between the two operating systems, so you won’t have to give up on your phone while using Ubuntu from it.

The fact that this sort of smartphone has very fast data connectivity (LTE where it’s available), only helps cloud apps, like Google Docs.

Another advantage for smartphone manufacturers, the project’s official website says, it will drive multi-core smartphone sales, as well as the docks coming with them.

It will also make things easier to manage for corporate IT departments.

I love the idea just as much as you do, but it won’t “just work”, even if you have a phone with all of the capabilities described above.

Canonical is currently talking to handset makers and operators in order to integrate it into their products. I’m sure very interesting things will come out of it.

Check out this YouTube video demonstrating Ubuntu for Android in action.