After more than a decade, Twitter says goodbye to its iconic 140 character limit.

Love it or hate it, the Twitter 140 character limit is what has always set it apart from other services. In the beginning, the limit was put in place in order to ensure compatibility with SMS devices which had a limit of 140 characters. Over time, however, the limit became a part of our culture – forcing people to focus their thoughts and message into a creatively crafted tweet which fit the 140 character limit.

The web interface at Twitter.com has already implemented the new 280 character limit, however, you will need to update the app on your various mobile device(s) and apps to get the change. Although there was some initial concern that this dramatic change would fundamentally change the service, Twitter spoke to this concern, explaining that the data shows this is a change its users have already embraced from its early testing in September.  Based on the successful pilot, the company decided to roll it out to all languages:

In September, we launched a test that expanded the 140 character limit so every person around the world could express themselves easily in a Tweet. Our goal was to make this possible while ensuring we keep the speed and brevity that makes Twitter, Twitter. Looking at all the data, we’re excited to share we’ve achieved this goal and are rolling the change out to all languages where cramming was an issue.

During the first few days of the test many people Tweeted the full 280 limit because it was new and novel, but soon after behavior normalized (more on this below). We saw when people needed to use more than 140 characters, they Tweeted more easily and more often. But importantly, people Tweeted below 140 most of the time and the brevity of Twitter remained. Source 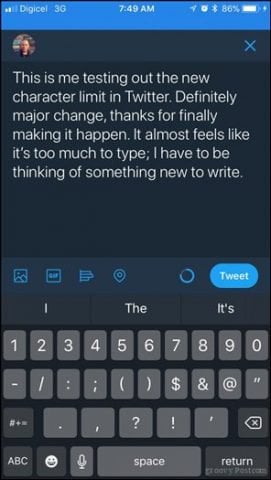 Twitter describes the change as making the act of tweeting easier and after testing out the new service, I agree.My complaint with the 140 characters was usually around URLs, which the social network always included in the limit. This update should certainly take care of that in addition to the many new methods of communication Twitter now offers: live streaming, explore tab and moments.

Granted, I honestly don’t want to read novels on my timeline but again, according to the data from the initial Twitter pilot, although users initially began using all 280 characters, they quickly settled into a more reasonable and natural character count.

If you want to get up to speed with the new features introduced on Twitter over the past year, check our article What’s New in Twitter? Features, Tips, and Updates. The groovyPost team would also love to hear your thoughts on this historic change at Twitter. Do you think this is a good thing? Do you hate it? Do you even use Twitter? Join the conversation by clicking the comment button below.