As computing continues to move toward mobile, why not introduce kids to it at an early age? Toys R Us is selling the Tabeo 7″ Android tablet designed for use by children.

As computing continues to move toward mobile, why not introduce kids to it at an early age? Toys R Us is selling the Tabeo 7″ Android tablet designed for use by children. 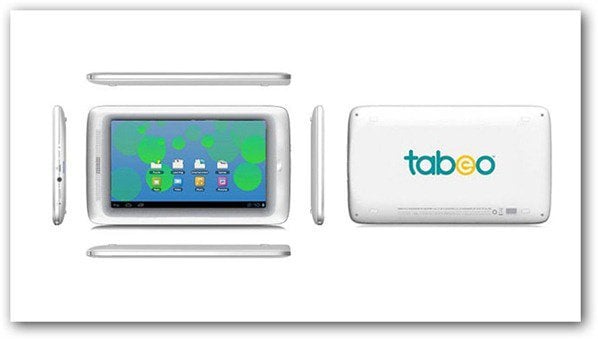 While the Tabeo doesn’t have huge specs compared to adult tablets, it’s enough for who it’s designed for. The tablet sports a 800×480 7″ display with WiFi support, a front camera, speakers and a microphone. Under the hood It has a 1 GHz ARM Cortex A8 processor, 1 GB of RAM and 4GB of internal storage. It also has a microSD slot, which allows you to upgrade the storage by up to 32 GB, plus a HDMI port for connecting to a HDTV .

The $150 tablet runs Android 4.0 — Ice Cream Sandwich — which the company has designed its own interface on top of. It will feature a lot of content aimed at the target audience like 20 kid-friendly games, 10 educational apps as well as apps for entertainment and books. The company also created a Tabeo store, where over 7,000 apps will be available for it.

If you’re a parent, the groovy feature for you is Parental Controls for up to eight users. So you can decide the type of content each child can access and how long they can use it. Now your kids can have their own device without borrowing yours and smudging up the screen with peanut butter and screwing up your settings.