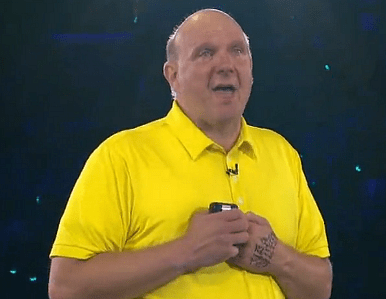 Microsoft CEO Steve Ballmer announced his retirement last month, and here you can watch part of the video footage of his emotional goodbye to employees.

Steve Ballmer, Microsoft’s outgoing CEO, has always been known for some crazy antics while giving speeches to the company. Instead of crazily shouting “Developers!” 40 times in succession and getting sweaty, this is an emotional farewell to the company he’s led for the past 13 years. After a tearful goodbye, he had the song The Time of My Life from the Dirty Dancing soundtrack play.

Tech site The Verge was able to obtain footage of his goodbye speech to company employees, which you can view below.

Steve Ballmer announced his retirement last month stating “There is never a perfect time for this type of transition, but now is the right time.”  in a statement issued in a press release.

When it was announced that Microsoft purchased Nokia Devices and Services for 7.2 Billion a few weeks ago, several people in the industry speculated that Steven Elop was the heir apparent. But maybe not, even though Elop received a hefty bonus in the acquisition, things seem to be heading in a different direction. Perhaps, we’ll see someone from the outside of Microsoft come into the fold.

In a recent story on All Things D, it was reported that Alan Mulally, current Ford CEO, is now in the lead. According to sources close to the situation, there has been a lot of “serious conversations” between the Microsoft board and Mulally.

In the end, whoever ends up being the new Microsoft CEO will have a lot on to deal with. Still, it’s the end of the Steve Ballmer era, and watching Microsoft development over the next few years will be interesting.