Japanese inventors have come up with a gizmo called the SpeechJammer. It silences people. You can imagine a lot of situations where it would be handy to pack a SpeechJammer–construction sites, NASCAR races, assembly lines, war zones, droning airplanes, and droning politicians, to name the obvious. And it could be a protest control tool that every dictator must have dreamed of. … 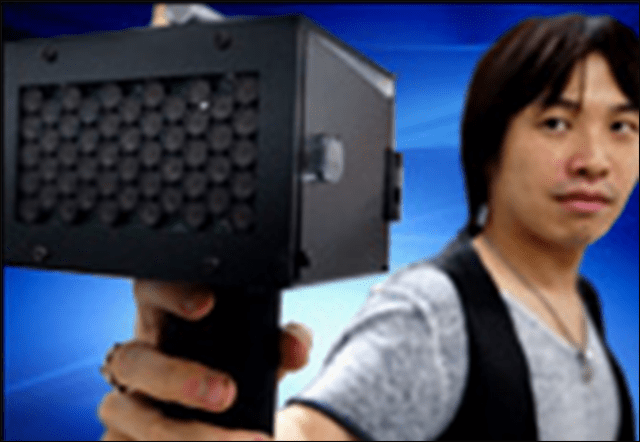 The Sound of Silence: This is how it looks to have a sound-annihilating SpeechJammer pointed at your mouth.

The next time someone says, “Either you shut up, or I’ll shut you up!” it may not be just an idle threat.

Two Japanese researchers, Kazutaka Kurihara and Koji Tsukada, have built a prototype of a device that can be used to silence anyone. The person may continue talking–larynx vibrating, lips moving, all that–but he won’t make a sound anyone can hear once someone aims the SpeechJammer at him and pulls the trigger.

We’re currently checking into reports that Bill O’Reilly and Sean Hannity have already tried to place orders. OK, we haven’t really. But even technology writers daydream.

The SpeechJammer looks basically like a large black acrylic cube balanced on a handle that has a pistol-like trigger. On top of the cube are a thin, long microphone and what looks like a Dixie cup glued to a small board rising from the box. It doesn’t jam sound the way crude devices have done in the past by producing even louder sounds that drown out the offending speech. Instead, the SpeechJammer turns sound waves into ordinary, unperturbed air. Or it will, according to the scientists’ report, With either result, the SpeechJammer works on the same principle as noise-canceling headphones. A laser 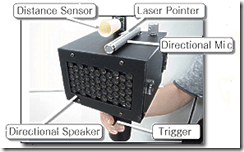 rangefinder–the Dixie cup–determines the distance to whatever is the source of the distracting or irritating speech. The distance is fed to the Jammer’s auditory circuitry. At the same time, the directional microphone picks up the offensive sounds and feeds them to the same circuitry.

Now the process becomes a game of supersonic Whack the Mole as the SpeechJammer varies the timing of its negative sound wave so it pushes against the matching positive wave with just the right amount of amplification to cancel out its evil twin.

That’s the theory. The reality is that the Speechjammer requires a lot of precision and readjustment to greet each of the thinly and thickly compressed portions of the incoming sound wave with its exact opposite. Because this is not yet perfect, the effect is that portions of the wave are nullified, and the speech that survives sounds like a stutter.

You can imagine a lot of situations where it would be handy to pack a SpeechJammer–construction sites, NASCAR races, assembly lines, war zones, droning airplanes, and droning politicians, to name the obvious. It’s interesting the researchers have named it a SpeechJammer, and the only examples they give, as in the video at the end of this piece, are for social situations. There’s no mention of mechanically produced noise nor of it being used as a protest control tool that every dictator must have dreamed of.

Think of the “human megaphone” developed by the Occupy Wall Street protestors. When one person in a large Occupy crowd shouted something to officials or reporters, the message could not be heard. So the protestors began repeating one person’s message in a chorus.With crowds as large as Occupy’s, it would take a phalanx of SpeechJammers to silence everyone. Personally, I’d settle for a device that would cancel out our dogs’ barking while I try to take a nap.

You, just go watch the video. And no talking till it’s over.