Sony today announced that it’s bringing a multi-view mode to its PlayStation Vue streaming TV service. It lets you watch up to three cable channels at once.

Sony today announced that it’s bringing a new multi-view mode to its PlayStation Vue streaming TV service. This new ability allows subscribers to watch up to three live cable channels all on the same screen. 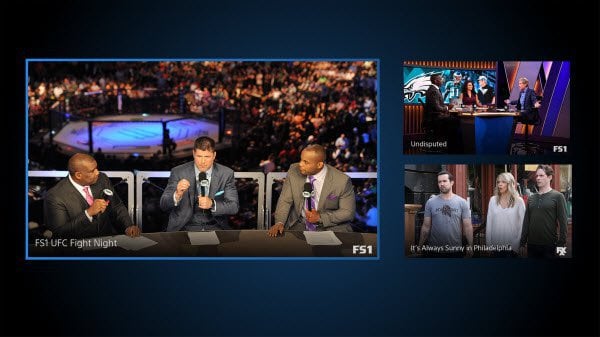 Sony says it expects sports fans will get the most out of the new multi-view feature but can be helpful to anyone. According to Sony’s blog post:

With March Madness starting next week, this will be a great way to catch several live games at once from TNT, TBS, TruTV and CBS. You can also use this feature for any live TV channel available on Vue, such as watching a mix of live news programs or live events at once.

This new ability is available for PS4 console owners starting today. To pull up multiple channels, press and hold the X button on the controller while on the Guide or Live TV section of the home screen. You’ll then get a menu that provides the option of using two or three screens.

We recently looked at the PlayStation Vue streaming service as a viable option for cord cutters to get live cable shows without an annual contract and extra equipment to deal with. Plans start at $29.99 and it’s available on multiple platforms including set-top boxes such as Roku or Fire TV as well as Android and iOS for watching while on the go. While the multi-view feature is currently available to PS4 console owners, there is no word yet on when (or if) it will be rolled out to other platforms.

The PS Vue team is also working on more new features including real-time sports scores and the ability to turn off spoiler alerts if you’re waiting to watch a game stored in your cloud-based DVR.

If you have a PS4 console and subscribe to PlayStation Vue let us know what you think of this new feature in the comment section below.