Slack hit a new milestone today by releasing the much requested native video conferencing to its service. In short, we love it! It’s fast, simple and just works with no extra apps or software!

With Microsoft close on its heals, Slack, the startup who is working to reinvent communication and collaboration in the workplace, announced today that it has expanded on its native “/call” feature by adding native support for video conferencing.

The new camera button is available in the Slack App, which users can click to start a video call. Users can initiate a call to either individual users or to an entire channel for a group voice or video call. Although the group calling is maxed out at 15 participants and requires a paid account, I can vouch for its simplicity and quality. Users running the mobile client can join video calls but will be limited to audio only.

Like with voice calling, it’s simple to get your team on a video call. No need to open a separate app, dial into a meeting, or share invite links. Anyone on your Slack team can call another person directly, and if you’re on one of Slack’s paid plans, your team can make group video calls with up to 15 people. Source 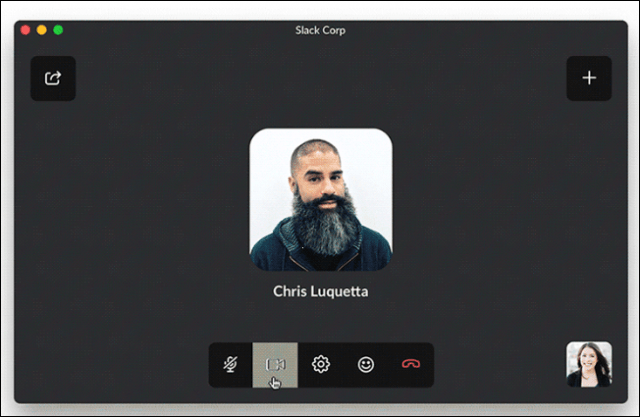 Slack is not making the new feature an island unto itself; if users prefer to not use Slack video, they can still replace it using third party services including Google Hangouts, Skype, and Zoom.

Personally, I am not a big fan of video, but I can see the benefits to large businesses, which is where Slack is hoping to become an established player. Brands such as WebEx and Microsoft, with its Skype for Business client, already have a strong presence in video. Microsoft’s own Teams comes out of the box with video support, so, this was a must have feature for Slack.

Slack says Video Calls will be rolling out over the next few days, so, periodically check for new versions for ChromeOS, Mac, and Windows.