Fridays are about to get more exciting as season 2 of The Mandalorian is premiering today. Follow Mando and baby Yoda on a new season of adventures.

Just in time for the weekend, the second season of The Mandalorian has arrived. The first episode of the new season 2 is now available to stream on Disney Plus. And if you need a quick refresher on what happened on the first season, Disney has put together a recap video that will get you all caught up in just 99 seconds. You can view the video below:

The Mandalorian, Baby Yoda, and the rest of the supporting crew start the next chapter in the epic story. Here’s some of what you can expect as well as the stars of the show:

In the second season, The Mandalorian and the Child continue their journey, facing enemies and rallying allies as they make their way through a dangerous galaxy in the tumultuous era after the collapse of the Galactic Empire. “The Mandalorian” stars Pedro Pascal, with guest stars Gina Carano, Carl Weathers and Giancarlo Esposito. Directors for the new season include Jon Favreau, Dave Filoni, Bryce Dallas Howard, Rick Famuyiwa, Carl Weathers, Peyton Reed and Robert Rodriguez. Showrunner Jon Favreau serves as executive producer along with Dave Filoni, Kathleen Kennedy and Colin Wilson, with Karen Gilchrist and Carrie Beck serving as co-executive producers.

You’re stuck at home anyway, you might as well get Disney Plus and binge the first eight-episode season of The Mandalorian if you haven’t caught it already. And then dive right into the second season. 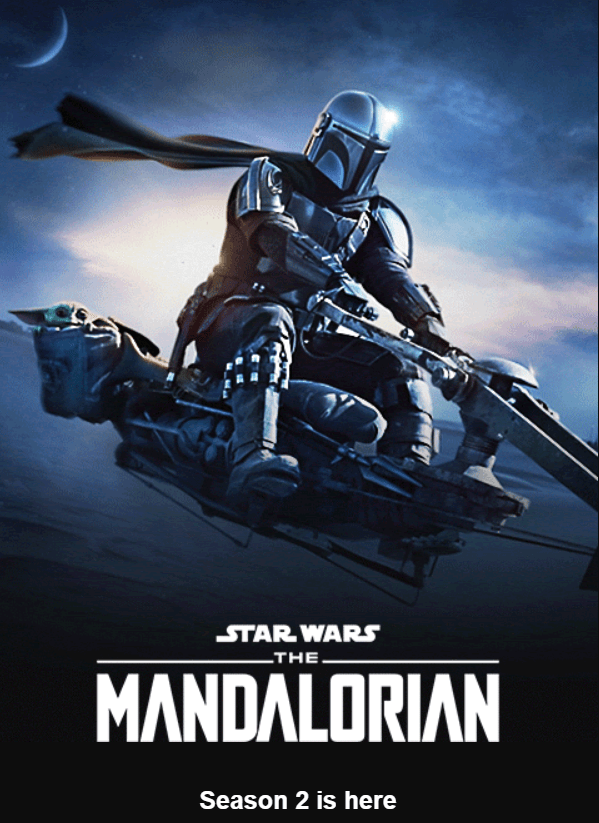 Disney Plus is available on virtually all devices and platforms including iPhone, iPad, Apple TV, Android mobile devices, web browsers, and devices like Fire TV and Fire HD. Disney Plus is also on Chromecast, Chromebook, Samsung and LG smart televisions, Roku devices, PlayStation4, Xbox One, and Windows 10. It’s available wherever streaming services reside.