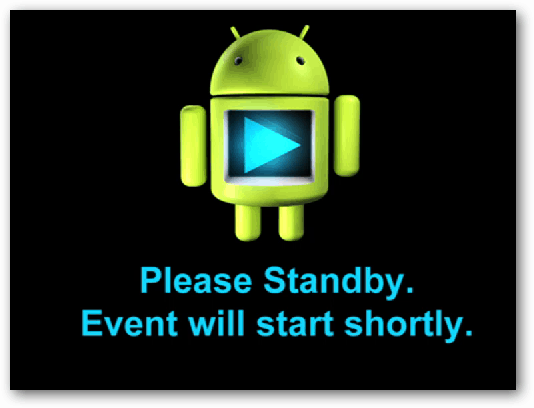 6:56 PM This is so Hong Kong. Dark, electronica. Sounds like Terminator. Wish they’d just play something … less Heroin-ey. It’s like the message is Android 4.0. Sleep. Sleep.
7 PM (10 a.m. announcement in HK begins) Finally a break from the electronica. 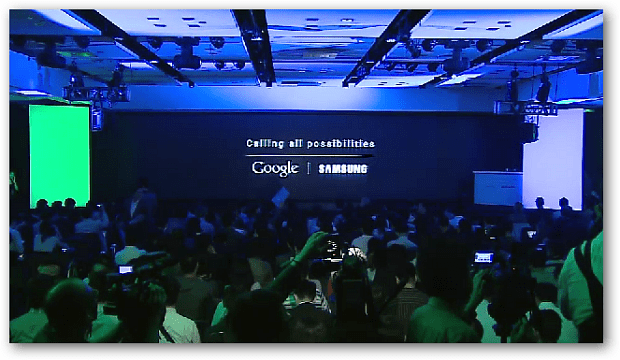 7:11 PM: Samsung exec is bringing up Android chief Andy Rubin. To help announce the Android 4.0 next generation Nexus phone — “we want people to put their (phone) back in their pocket, feeling satisfied. So it’s like your cell phone is acting on your behalf because of cloud services.”
7:13 Rubin: Rolling a video.
7:14 “everyone, we are proud to announce the Galaxy Nexus.” It is a Super AMOLED display phone. Kevin Packingham, from Samsung Mobile, steps up to stage.
7:15 Packingham: Goes through specs, says Samsung and Google worked closely on the curved and contoured Galaxy Nexus smartphone.” 8.94 mm width, with a tiny bezel. “We can give you content that goes to the outer edges of the device.”
7:30 Now we know — it features Hyperskin! Buttonless. 1.2GHz, 5mpixel camera, zero shutter lag, 1080p HD recording, NFC is included for mobile payments and for sharing contacts, a drop in dock
7:33 Starting in November US, China, in Japan with Docomo. Now they’ve announced the phone — Galaxy Nexus — available in November — time to talk Android 4.0.
7:34 Google’s Matthias: “We asked ourselves for the first time — what is the soul of Android.” Hard to believe it’s been just six months since Android 3.0 honeycomb unveiled.
7:35 Matthias: We could see “people didn’t LOVE Android.” So now they are making it “enchanting, something beautiful and seductive you can really fall in love with. And Android should make me feel powerful and smart.”
7:36 “Meet Roboto. A totally new typeface for Android.” The entire presentation was set in Roboto. This is very Steve Jobs of Google. 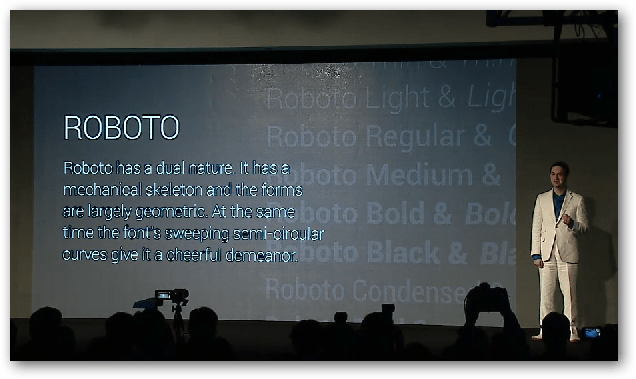 7:37 “like a magazine layout” — sounds familiar! “plenty of whitespace” — these are just good design suggestions.
7:38 Android’s new look starts right on the lock screen. In ICS we’ve updated live wallpaper, too. “while redesigning we’ve replaced boring button presses with gestures, took all of the actions you can do every day, we’ve redesigned every screen.”

7:42 Everything is at app level. The widgets tab is on top. You can pick them up and drag and drop them. Widgets are now resizable — this was announced and shown at Google I/0
7:43 “And speaking of keeping things at your fingertrips, you can put favorites — and friends — on the tray.”
7:44 Android “not just for power users!” Ah, bummer for the power users. Supports a “flick” gesture. Also supports some gaming features — hold down power and VOL down to capture a photo of any screen.
7:46 Introducing a music player control notification. “Not all notifications are created equal” — that’s a quote — I am glad I don’t write speeches for these guys.
7:47 “Gave the keyboard a lot of love in Ice Cream Sandwich.” Suggestion script, inline spell checker, or add new words you just learned. Improved cut, copy and paste. Just drag and place it — looks fast.
7:48 Talk to type feature — is now instant for texting. “Hey, man, I’d love to talk right now. But I’m a little bit busy — period.” Laughs from crowd. No button pressing for talktotype texting.
7:48 your phone should just recognize you – FACE UNLOCK. Uses “state of the art facial recognition” ICS literally knows your face. “But when the phone sees me … (falters, it doesn’t recognize him) .. i guess this makeup tonight was stronger than i expected. I’ll show it to you later in the demo area.
7:50 Hugh Ybarra of Google takes the stage. Request desktop site — you get the real deal desktop version right away, automatically synced bookmarks with Chrome cross-platform.”
“This feature is perfect for stuff like plane tickets .. no connection necessary, it’s local.” That’s the new Android browser.
7:52 Our goal is to build the best email experience anywhere. Redesigned Gmail inbox, a new action bar that “puts your most common actions front and center.” Select multiple messages and archive them at once.

You can watch the full presentation via YouTube below.