Samsung Galaxy Chat is aimed at people typing a lot on their phones — be it emails, text messages, or a short novel written on the way to work. 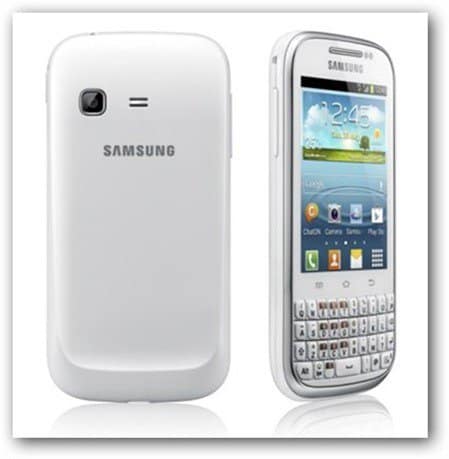 I’m pretty sure there’s still a market for phones featuring a full QWERTY keyboard, as there are always people who text all the time (I’m sure most teenagers fall into the category, but to be quite honest, I miss a physical keyboard sometimes, too – especially when I have long e-mails to write on the go).

Apart from the keyboard, the smartphone, one which Samsung has announced on its blog, has a 3 inch QVGA touchscreen (with a 320 x 240 resolution, GSMArena says) and it has a dedicated key for Samsung’s own ChatON service. Samsung has added a lot of navigation features so you can find what you want in the menus a bit quicker, including icons that have 3D effects (I wonder how those look), as well as the possibility to start the camera straight from the lock screen and to dismiss apps by swiping.

Business users will also be happy to hear (well, read), that Quick Office is pre-installed (it costs $14,99 in the Play Store, but it’s good to have it the moment you get the device), and Samsung has added its own S Planner app, for schedule management.

No word on CPU speed (but, with such a small screen resolution, I expect a single core one), but the announcement does mention the fact that it runs Android 4.0 Ice Cream Sandwich and that the Galaxy Chat has 4 GB of internal storage. It also has a microSD slot, which allows you to expand memory with up to 32 more gigabytes.

What’s interesting is that the device will also have a LTE version – it says so in the small print on the spec picture, as you can see below. The specs on that version could be different, Samsung says, but since the company hasn’t revealed too many of the specs on this one yet, that doesn’t change too many things… 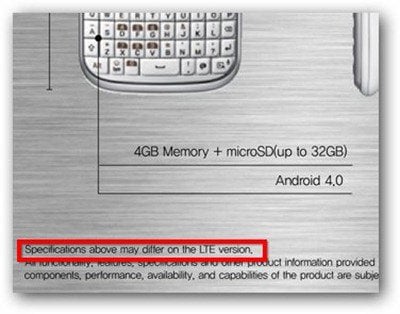 And since we’re talking Android, here are five tips to improve battery life on your device.