Samsung has launched the new member of the Galaxy S series, called the Samsung Galaxy S III, and it does look like it will be perfectly able to continue the success story. It features a quad-core processor and it’s thin, at 8.6 mm.

Samsung has launched the new member of the Galaxy S series, called the Samsung Galaxy S III, and it does look like it will be perfectly able to continue the success story of the Galaxy line. It features a quad-core processor and it’s quite thin, at 8.6 mm.

Here’s a quick look at the features – first of all, the processor is quad-core 1.4 GHz one, and the smartphone has a 4.8 inch 720p display that has no reason to disappoint (considering its predecessors), protected by Gorilla Glass 2.

The smartphone is just 8.6 mm thick (its weight is 133 grams) and it features an 8 megapixel camera, that can take pictures fast and burst shots (up to 20 at a time). The interesting thing is that it chooses the best picture by itself.

Memory will be 16 and 32 GB, but there will be a 64 GB version soon. It can be upgraded via a microSD card.

The new Samsung flagship device has a 2100 mAH battery and it can be charged wirelessly, through a charging pad, believe it or not. 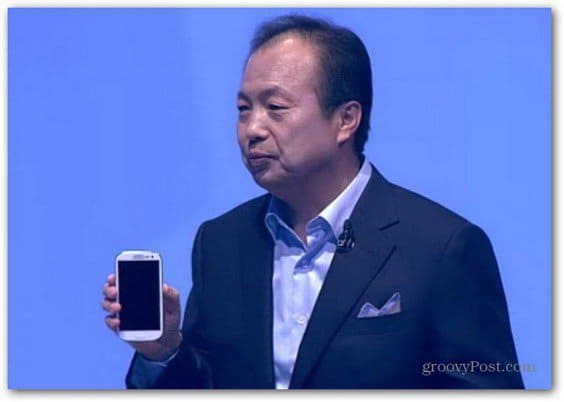 It runs Android 4.0 with a Samsung flavor to it.

The company also announced some of the features of the new device, including Smart Stay – which “sees” your eyes and keeps the display lit when you’re, for example, watching a movie or reading an e-mail.

Another groovy feature is S Voice, which seems like a smarter version of Siri – you can wake up your phone with your voice (when driving, for example), as well as use it to make appointments, get weather and whatnot.

I also liked Smart Tag, a feature that actually recognizes your friends in photos and auto-links them to their contact data.

These are just some of the features, but I’m sure you’re interested to know when it will be available. Well, the 3G version will be available on May 29 in Europe, and it will start a 10-city world tour on the same date.

The 4G version will be available in the USA this summer.

Two colors will be available – Pebble Blue and Marble White – personally, I like the blue version.

While you’re waiting for yours, how about a look at the best Android browsers.