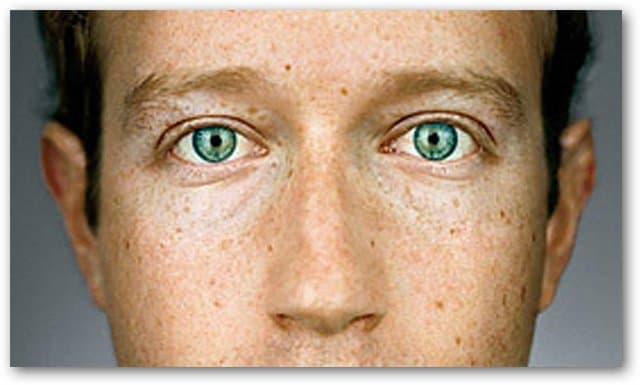 Facebook founder and CEO Mark Zuckerberg takes home about $1.5 million in salary, bonus, and other compensation, but could be worth up to $28 billion thanks to stock holdings, following Thursday’s IPO filing, according to paperwork filed with the Securities and Exchange Commission. 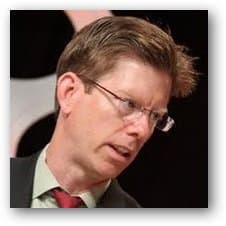 Meanwhile VentureBeat’s Dylan Tweney, shown on the left,  came up with six things you should know if you want to hand over some money in exchange for owning a very, very small part of Facebook.

1. The offering will probably raise $10 billion in cash.
That’s for the company. The offering will likely value Facebook at somewhere between $75 and $100 billion, making founder Mark Zuckerberg, who holds an estimated 24 percent of the company, a billionaire many times over. That valuation is not far off the implied valuation of about $80 billion that the company currently has on secondary market Sharespost. But it’s twice the amount of money Facebook’s paper work said it hoped with the IPO. Then again, it’s always hard to turn down someone wanting to give you more money.

2. 400 million people use Facebook every day.
Facebook claims it has 800 million registered users worldwide, and that half of them check into the site every day. It won’t be long before the company reaches a billion customers which is a milestone few other companies have reached. Microsoft, Nokia, and Walmart have probably done it — though they all have a billion paying customers, whereas Facebook’s registered users don’t pay to use the service, they just provide the attention that advertisers pay Facebook for.

3. Facebook has more than twice as many U.S. users than Google did at its IPO.
VentureBeat contributor Rocky Agrawal points out that Facebook now has 100 million more U.S. users than Google did at the time of that company’s IPO. In December, Facebook had 162.5 million unique users in the U.S., according to Comscore Media Metrix. By contrast, Google had 61.9 million when it went public in August, 2004. Google was then the No. 4 web property, Agrawal points out — the same position Facebook now holds.

4. People spend time on Facebook. A lot of time.
When you look at Nielsen’s ratings of the top U.S. web properties, Facebook comes in at No. 2, after Google, with an audience of 153.4 million. But the time those people spend on Facebook dwarfs every other site in Nielsen’s top 10, with Facebook visitors spending an average of 6 hours and 51 minutes per person per month.
That means people in the U.S. spend more than one billion hours per month using Facebook, every month, Tweney calculated.

5. Facebook is building a new operating system for the web.

Facebook is not just a social network, it’s a development platform upon which you can build applications. With a new array of developer tools and the ability to share information about what people are doing in real time on its Open Graph, Facebook is attempting to make itself into the platform of choice for any web developers.
Facebook started with one verb — you could “like” things or not — but is now expanding its lexicon, so Facebook apps can let you “watch,” “read” or “eat” things. In time, any human experience will be able to be codified in a Facebook app and recorded on your Timeline.

6. Facebook is trying to become the new AOL.
The reason investors get so excited about Facebook is the same reason those of us who love the open web get nervous about it: Facebook is building a walled garden that will give its customers everything they could possibly want, from cat videos to news analysis by the Washington Post, in one place. Unlike the open web, Facebook will control everything, making the experience consistent, ensuring safety, enforcing rules about decency and copyright and identity, and taking a cut of every transaction.

Here’s another way to look at it, Tweney wrote: Facebook is trying to do what AOL failed to do in the 1990s: Create a safe, family-friendly, completely controlled alternative to the open Internet.
A lot of people who believe in an open Internet may not like the idea of another AOL wit, but there’s not much they can do about it.

Now, for some thought to chew on, here a cartoon that pretty well sums up Tweney’s wariness of Facebook: 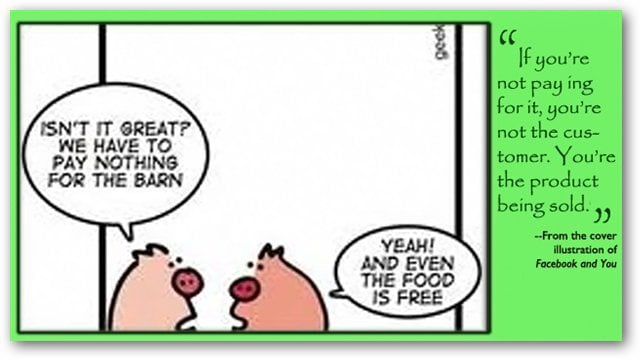