Adobe’s Photoshop Touch for the iPad 2 went on sale at the iTunes store Monday, just as scheduled but two days behind an unscheduled premiere at the iTunes store in New Zealand Saturday. The N.Z event was apparently a flop but all the same, it managed to raise the pulse rate of impatient Photoshop/iPad users before Adobe quickly killed the online offering. 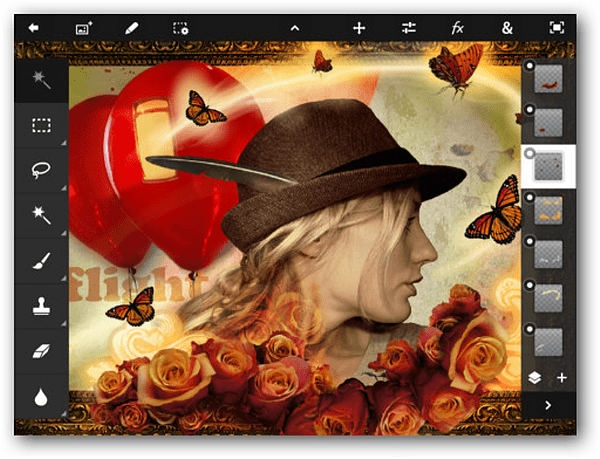 Monday, anyone with an iTunes account, a computer, and 10 bucks to spare could buy Photoshop Touch, the first Photoshop mobile product that can hold its head high in the presence of the desktop version. Some–like me–found that without first upgrading the OS to version 5, they couldn’t install the Photoshop. And I hope I’m not the only one who discovered that updating my operating system also carried a risk of losing apps, songs, movies or anything else I had installed on the iPad. (I still haven’t figured this out completely, and if there is an Apple genius–guru will do–out there who also knows Windows, I direct y our kind attention to the “Personal Note” below.)

For some time Adobe Photoshop Express has been available for the iPhone and iPad and nobody cared. But the Photoshop Touch is more like the product made for desktops, with layers, tool selection, adjustments, and filters, all of which use the iPad multitouch ability. Some features are new, possibly because of the need to use the program with pudgy little fingers instead of a mouse or stylus. The Scribble Selection tool lets you keep or erase part of an image by scribbling around and in the image.

My favorite new feature is the ability to rotate an image to create a 3D look at it layers. It’s a grand way to see what’s going on in each layer.

Another option lets you pull images from Facebook, give them your own artistic treatment and then upload them back to Facebook to show off to all your friends and followers. And Touch integrates Google Image Search so you can suck down images from the net without ever leaving Photoshop. To see what it’s like and to assuage your impatience until tomorrow, check out the video below, in which John Nack, principal product manager for Photoshop Touch, will give you a vicarious thrill.

(Personal Note: I wish someone had told me I was supposed to hook the iPad to my desktop running iTunes the first time I brought it home. I’ve been using my iPad2 for six months without even thinking about iTunes.  In fact, I do my best to keep it off my systems entirely.  But now, after installing iTunes, when I try to use it, I get this warning about everything on the iPad being wiped out. Supposedly, iTunes is supposed to be the only way I can get apps, and it keeps them, treating the iPad as a poor appendage to which in loans out apps and content from time to time.

OK, I’m starting to rant. The point is I don’t see any intelligent way to back up my files and know they’re backed up. If you do, please leave a comment or email m at ron@groovyPost.com. Thanks.)