Pandora updated its iOS app to include an alarm clock feature. And the feature has also been added to Android smartphones. Here’s a look at using it.

Pandora made an update for iOS that includes an alarm clock feature about a month ago. And on the heels of that, the Android version has been updated to include the same feature. The Alarm Clock feature is available for the iPhone, iPod touch, and Android smartphones.

Note: Of course there is a caveat – there always is right? The tablet versions of Pandora don’t have the alarm clock feature either on iPad or Android tablets like the Nexus 7. I haven’t been able to get any info on why or if the feature will come to tablets in future updates. Also, the feature hasn’t come to Windows Phone yet either.

The iOS version received the Alarm Clock feature in early December. According to a recent post on the Pandora blog, user reaction to the feature was overwhelmingly positive. So the company decided to add Alarm Clock to Android smartphones too.

Pandora’s Alarm Clock allows you to wake up to your favorite music as well as hit a snooze button – it can be set for 5, 10, 15, or 20-minute increments. If you like to fall asleep with your favorite music playing on Pandora, there is also a Sleep Timer.

Using the Pandora Alarm Clock on Android and iOS

Make sure you’ve updated Pandora on your Android smartphone to the latest version via the Google Play Store. 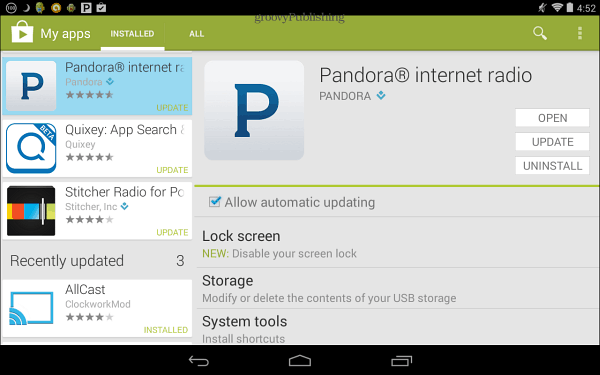 Then you’ll find the Alarm Clock and Sleep timer at the bottom of the Settings section that slides over from the right. 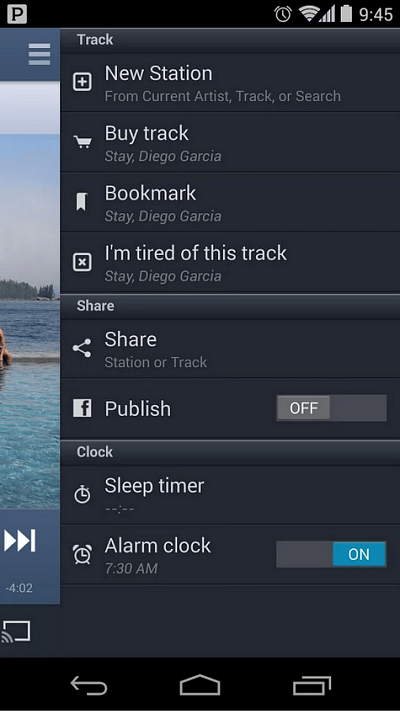 Pandora’s Alarm Clock feature works virtually the same on the iPhone and iPod touch as well. Pull it up, set the Sleep Timer before you go to bed if you want. Then turn on the Alarm Clock and set it to the time to get up, the Station you want to wake up to, the Snooze interval, and the volume. 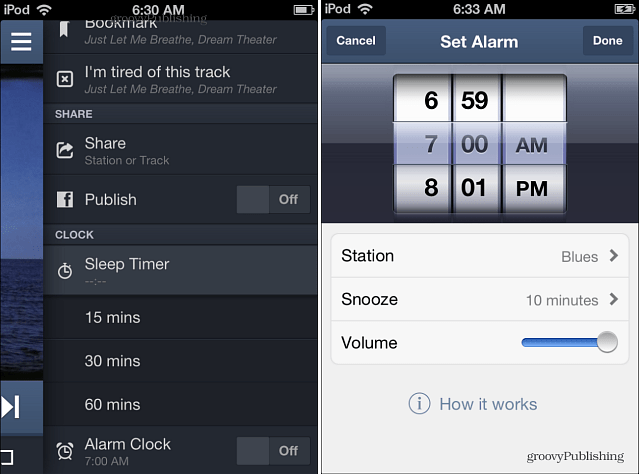 This is definitely a welcome feature for Pandora users, and it works well from my tests. However, the fact it’s not available on tablets is hard to overlook. Hopefully, we’ll see it added in a future update.