Dropbox is doing away with Public folders for any new account created from now on. There’s new a way to share that’s nearly as convenient and safer.

This week Dropbox finally implemented a change that was announced to roll out at the end of July. New users signing up for Dropbox will no longer have a Public folder by default. Aside from lack of use and a few other reasons, the main initiative behind the policy change was that Google’s search engine was indexing some Public folders and making the contents “truly public.” This resulted in some unhappy users among those who were careless enough to store sensitive information within the Public folder.

Dropbox is aware that many users rely on the Public folder for operating small websites or apps. The company has also rolled out a shared API for developers working with files that need public access. However, despite the new position on Public folders, it is still possible to create one via a secret link – which can be found here. Opening the secret link will automatically create a Public folder for any new account created after October 4, 2012. There’s no way to remove a Public folder

With this change comes renewed encouragement for users to employ Dropbox’s new sharing feature, which allows you to make any folder publicly available via a secret link. To do so, just open up the folder in question, click the “Share link” button at the top of it, and then click “Copy link to this page.” Most importantly, the person you send this link to will not need to sync the entire folder or file to their computer in order to use it – they can just download it instead.

This same sharing process can be completed from within Windows for files in the Dropbox folder via the context menu option Dropbox >> Share Link.

These “public” links can be managed from the Links tab within the Dropbox website control panel. The links page will show you the creation date of every link, as well as allow you to remove it so that the file or folder is no longer available to people with the link. 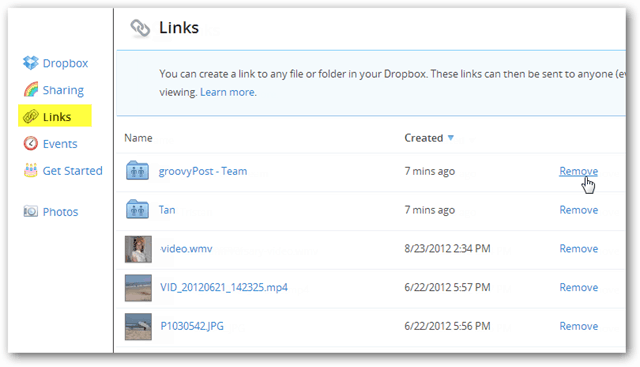