Microsoft today has started to roll out Windows 10 Mobile Build 10586.63 to Insiders. There aren’t any major features, but does contain bug fixes and performance improvements.

Microsoft today has started to roll out Windows 10 Mobile Build 10586.63 to Insiders (Fast Ring). This is a Cumulative Update without any major feature updates but does contain bug fixes and performance improvements.

There was a bit of confusion about the update at first. According to Gabe Aul, the update was partially staged and some users detected it. Gabe said, “We paused the updated to investigate, and ensure that everything was 100% ready”.

Then Gabe posted the following this afternoon on Twitter:

To get on top of things and grab the update now on your Windows Phone head to Settings > Update & Security > Phone Update to start downloading it. You’ll need to restart your phone for the update to complete. 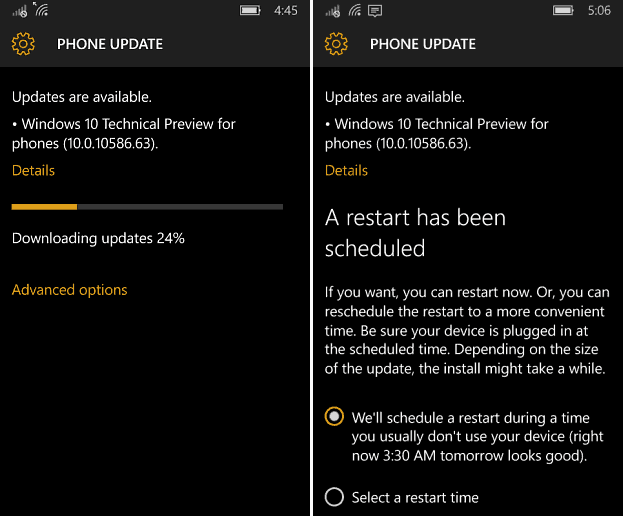 As is usually the case for these mobile updates, for me anyway, they take quite a while to download and install. In fact, at the time of this writing, my Lumia 635, which I’m testing Windows 10 Mobile, is sitting at 0%, but it should complete at some point today.

Gabe even mentioned on Twitter that you’ll just need to be patient if you don’t see it right away. The update will roll out gradually and when you get it depends on your region and the model of your phone.

You can see the full conversation thread here.

After you’ve been able to install it on your device, leave a comment below and let us know how things are working out.

Update: 1/8/2016: A Microsoft employee that goes by jenmsft on Reddit posted a few of the items in the changelog for today’s update: