Reed Hastings, Co-Founder, and CEO of Netflix posted on the Netflix blog a few days ago about the changes to the DVD and streaming services. The news is not good timing especially since we’re all still recovering from the strange and abrupt pricing change/restructure that Netflix threw on everybody a couple of months back — so is this going to make everything even worse? GroovyPost is here to clarify what Netflix will be offering and what Qwikster will be doing. I’ll review the groovy parts of its change and the not-so-groovy parts. 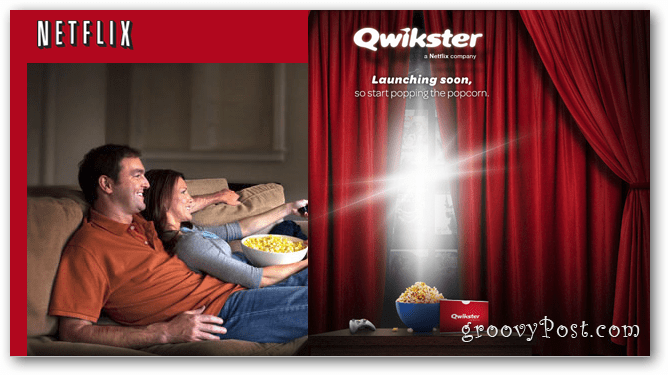 It’s now going to be streaming only. Netflix.com will be the place where you go to stream movies and TV shows. No big surprise. It’s been training us for the past few years to visit netflix.com to watch movies and TV shows on everything from our Apple TV, Xbox, Mobile Phone, etc. None of this will change. However, you won’t be able to use it to build a queue for DVDs.

If you want more than just streaming, you’ll need to go to Qwikster.com to manage your account, including your DVD queue. Netflix is saying that the site will look almost identical to the current site, so at least you won’t need to learn an all-new user interface. At least not yet.

People have been asking Netflix for a video game mailing service since its inception nearly 15 years ago. So along with the name change and spin-off of the DVD business, customers will be able to have video games shipped to their house along with DVD and Blu-ray movies. According to the news announcement, the payment structure for video games will be similar to how they offer the upgrade option for Blu-ray DVDs. Unfortunately, the exact pricing structure is yet to be announced.

Here’s what Reed Hastings (Netflix CEO) had to say about pricing and other changes.

“There are no pricing changes (we’re done with that!). Members who subscribe to both services will have two entries on their credit card statements, one for Qwikster and one for Netflix. The total will be the same as the current charges.”

Phew, no price change. But note that if you’re subscribing to both Streaming and DVD shipments, there will be two different credit card entries. This is because, as Reed went on to say later, these are 2 completely separate companies now. Different CEOs, workers, etc. This, of course, includes two different websites, using two different databases, therefore you’ll need to manage your User ID, Credit Card info, passwords, ratings and more separately. If you rate a movie on Netflix, your rating will not update your Qwikster account.

The iconic red envelopes will still be around, the only change is they’ll be adorned with the new Qwikster logo, instead of the Netflix logo.

Finally, it should be noted that Qwikster is a wholly-owned subsidiary of Netflix. Period. Looking around the internet (including some of my friends I’ve spoken to about this) there appears to be a lot of miss-information about Netflix selling the DVD business to an unknown third party. This is not the case–in fact, if you go to qwikster.com, look below the logo for the text “- a Netflix company”. Also, the new CEO of Qwikster is Andy Rendich who has been working at Netflix for 12 years and leading it for the last 4 years. Obviously Andy was hand-picked from Netflix CEO and co-founder Reed.
So while many of us have mixed feelings about the large structural change, again here’s what Reed Hasting had to say:

It looks like they want to be able to grow each side of the business (Mailing & Streaming) with laser-beam focus and no distractions. Hopefully, this will lead to more goodness in the future for customers. I’m hoping we won’t see too many more changes anytime soon (unless it’s the good news of course) so we can fully digest this latest round of upheaval.
How do you feel about the changes to Netflix? Let us know in your comments and in the poll below.