Amazon today announced that Mozilla’s Firefox web browser is now available for its Fire TV and the emphasis is accessing YouTube.

Amazon today announced that Mozilla’s Firefox web browser is now available for its Fire TV set-top box and streaming sticks. It joins the company’s own Silk browser on the set-top box for browsing the web on your TV.

According to the announcement, it is available for all generations of Fire TV devices and in every region. “With full web browsers on Fire TV, our customers’ entertainment and information options are greatly expanded. We want to make it easy for customers to access the Web from the comfort of their couch,” said Marc Whitten, vice president, Amazon Fire TV and Appstore. “We’re excited to bring web browsing to customers on every Fire TV device in every country where they’re sold.”

Firefox execs seem excited about this new ability as well and are pushing the video experience. “Bringing Firefox to Fire TV is an exciting new way to reach our users and serve up more of the full web to everyone,” said Mark Mayo, Sr. Vice President of Firefox. “Firefox has always been about bringing the web directly to people no matter what device they’re using. Starting today, we will be able to expand the already great Fire TV experience by enabling viewers to surface a multitude of web content — including videos — through Firefox.”

The emphasis on online video content is an obvious shot at the spat between Google and Amazon about the YouTube app. A couple of weeks ago, Google announced it is pulling YouTube app from Fire TV and Echo Show. The companies have a dispute going because Amazon wasn’t listing Google products like Chromecast or Google Home speakers.

However, Amazon did announce it would start selling Google products again an is already listing the Apple TV 4K – which was also not available for purchase on its site for several years. We recently found out that Amazon Prime Video arrived on Apple TV earlier this month. So, perhaps the ban on a YouTube app on Fire TV won’t come to fruition after all. Still, even if Google stands firm, you can always get your YouTube fix through the new Firefox browser or Amazon’s own Silk browser. 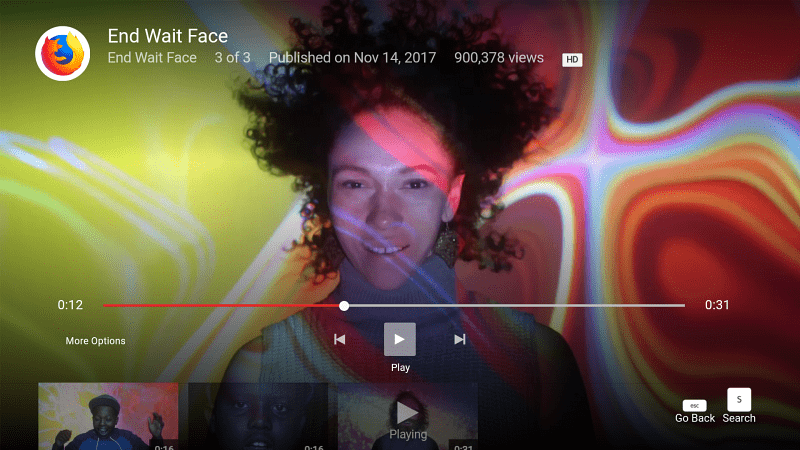 The product description for Firefox is as follows: “Watch videos from YouTube and other popular sites — or search the entire web — with Firefox for Fire TV. Use your Fire TV remote or app to play, pause, fast forward and rewind. The Firefox for Fire TV home screen even includes quick access to YouTube, other video sites and some of the web’s best content and ideas. Firefox for Fire TV is made by Mozilla, the non-profit champions of a healthy internet.”

I have only used Firefox on the All-New 2017 Fire TV 4K briefly, but it seems solid and does what you’d expect from a web browser on a streaming box. It works well with the remote for navigating around the web. It also seems to work well with Alexa. We’ll have a more in-depth review of it in the coming days and you can find out more at the Mozilla Support Page.

Are you looking forward to using Firefox on Fire TV? If nothing else, it provides another option to watch YouTube if Google does, in fact, pull it on the first of the new year. Let us know your thoughts in the comment section below.