And it’s armored to the teeth in Kevlar fibertech and Corning Gorilla glass. Splash guard protection. Nanotech coating for ultimate phone protection. I’ll do a report on that tech and how it works for Groovy Science! later today, so stay tuned. To get a feel for the event today, here’s the rowdy promotional video execs showed:

As was leaked, the Verizon-powered RAZR is a true 4G LTE — phone, just the second to market. The Droid Bionic was first. Now for the specs:

Our sources say this phone will in weeks or days be upgradable to Android 4.0 Ice Cream Sandwich, but time will tell. RAZR, storage-wise, is mid-line but a good bang for the buck, considering 16GB of storage, plus a16GB microSD card. It’s also among the first, like the Apple iPhone 4S, to ship with Bluetooth 4.0 — something I’m definitely going to dig into. 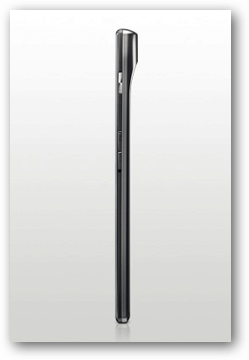 It's a scary thin smartphone -- Mororola says it's the skinniest ever. 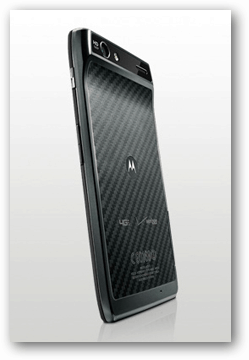 In addition to an armor including Keflar and Corning Gorilla glass, Morotola claims the RAZR's got " force field of water-repellent nanoparticles shields the phone against water attacks — even the electrical boards inside."

AT $299, it exactly matches the price of the 32GB Apple iPhone 4S version, but it’s an LTE phone, has a comparably huge, hi-res display and expandability to Android 4.0 and upcoming, 64MB microSD cards coming down the pike.

Cloudware and utilities:  Quickoffice, Motocast for streaming (and downloading PC content), the Smart Actions app for optiziming task and energy uses. Like other devices, Motorola’s gone with Webtop as its app for docking with a Lapdock 100 or HD Station.

The Motorola Droid Razr will be available for $299.99 in early November after a new two-year service agreement with Verizon Wireless. You can start to preorder the phone on October 27. CNET has a nice piece here. I’m guessing this isn’t the last look we’ll get at a RAZR today. Google, in its Honeycomb announcement with Samsung in Honk Kong tonight Pacific Time, could sneak a look at an ICS RAZR tonight after its early evening PT 7 p.m. event. GroovyNews will be here for you.

The RAZR is on order Oct. 7 and will arrive as expected November 7.