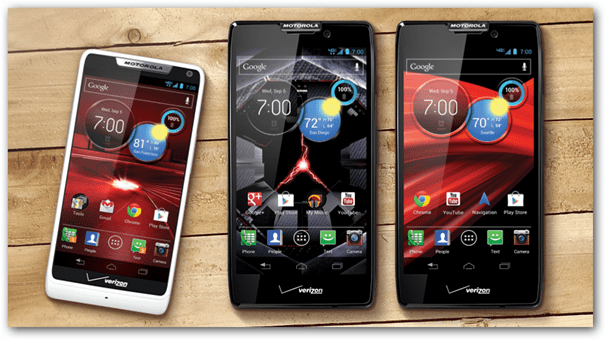 Motorola is jumping on the new smartphone announcement bandwagon with Apple, Nokia, Samsung and a host of other mobile companies. Recently Nokia announced two new smartphones and Apple’s iPhone 5 will also come out in a matter of days, as it has an official release date.

The strange thing is that Motorola’s new smartphones are not running Jelly Bean, the latest installment of Google’s mobile operating system – Motorola Mobility is owned by Google, after all, so I’d expect them to get all the juicy new updates first. Word is though, the phones should get the Jelly Bean update before the end of this year.

The Droid Razr HD is the follow up to the Razr and it features a Dual Core Snapdragon S4 processor running at 1.5 GHz, a 4.7 inch HD display with 720p resolution and LTE support. It also features an 8 megapixel rear facing camera.

Last but not at all least, the Razr M seems to be more of an everyday LTE  casual use smartphone. It features a smaller screen – 4.3 inch with qHD resolution – 960 x 540 pixels, but it goes from one edge of the screen to the other. The processor is dual core too and it also has an 8 megapixel camera.