Microsoft today delivers a second cumulative update (KB3081436) that the company says will improve functionality and resolve security issues. Here’s a look at how Microsoft describes this most recent update:

The security update for Windows 10 that is dated August 11, 2015, includes improvements to improve the functionality of Windows 10 and resolves the following vulnerabilities in Windows:


Windows 10 updates are cumulative. Therefore, this package contains all previously released fixes. (See KB 3081424.) If you have previous updates installed, only the new fixes that are contained in this package will be downloaded and installed to your computer.


Of course this update will be delivered and installed automatically, but if you want to manually update now, head to Settings > Update & Security > Windows Update to download it. A restart is required to complete the updating process. 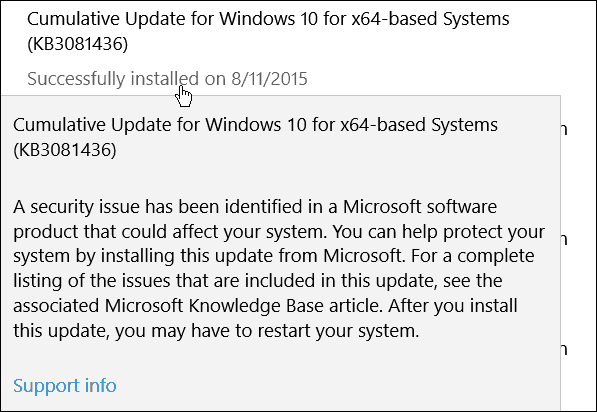 You can read about everything included in this update on this Microsoft Support page.


Of course this is the Microsoft’s regular “Patch Tuesday” so if you’re running earlier versions of Windows or Windows Server, make sure to check Windows Update for patches and fixes for those operating systems, too.