Microsoft late tonight rolled out a cumulative update for the Windows 10 Fall Creators Update to Insiders in the Fast ring. This is essentially the RTM version.

Microsoft late tonight rolled out a cumulative update for the Windows 10 Fall Creators Update to Insiders in the Fast ring. It brings the current Preview Build 16299 which was released last week up to build 16299.15. Dona Sarkar made the announcement of this release on Twitter late Monday night.

Hey #WindowsInsiders, we have released Build 16299.15 to the Fast ring tonight: https://t.co/ZnsVsQ7BqO

As with all the recent Insider builds, there are not any new features to report, and no specific issues are addressed. This update looks to be testing out its servicing with cumulative updates that are familiar to all stable releases of Windows 10. “We have released Windows 10 Insider Preview Build 16299.15 to Windows Insiders in the Fast ring. As we prepare to release the Windows 10 Fall Creators Update to the world on October 17th, we will now start testing out servicing this build with the Cumulative Updates via Windows Update,” writes Sarkar in a blog post update. 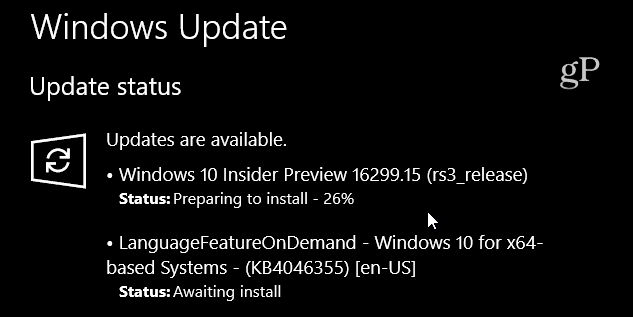 This latest build looks to be what the company used to refer to as the Release to Manufacturing (RTM) version. Since Microsoft is treating Windows 10 as a service, there are no longer RTM builds per se, but it’s safe to say that this is the final one. Any new bug fixes and other tweaks will come by the way of cumulative updates or patches through Windows Update and will not be full new builds.

After you install this cumulative update, hit Windows Key and type: winver and hit Enter. You will see that your version has been bumped up to 16299.15. Also, note that there is no longer an “Evaluation Copy” watermark in the lower-right corner of the desktop. 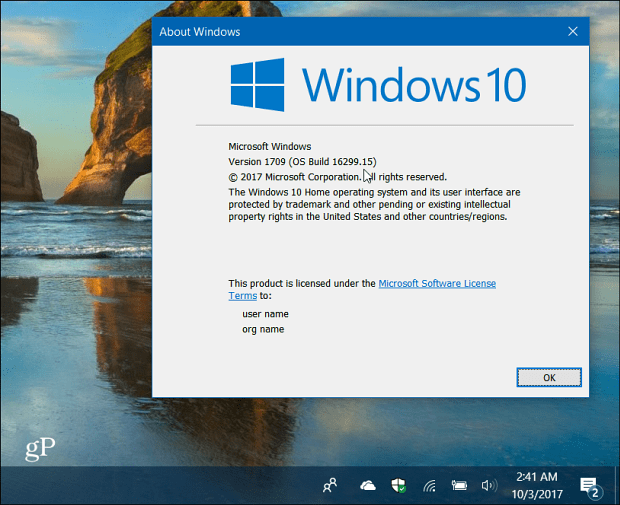 This update bumps your version to build 16299.15 which is the Fall Creators Update RTM.

Are you excited that the launch of Windows 10 Fall Creators Update is just around the corner? Will you update right away or wait before pulling the trigger? Leave a comment below and let us know your thoughts.

Also, make sure to join our Windows 10 Forums for more discussion of all Windows 10 versions including tips, tricks, and troubleshooting advice.