The Microsoft Surface tablet running Windows RT finally has an official price tag to it. Two models are now available for pre-order

The Microsoft Surface tablet finally has an official price — and it’s about time! The price was accidentally leaked early this morning, and the company confirmed it a few hours later. Two of the models are available for pre-order to be delivered by October 26th. 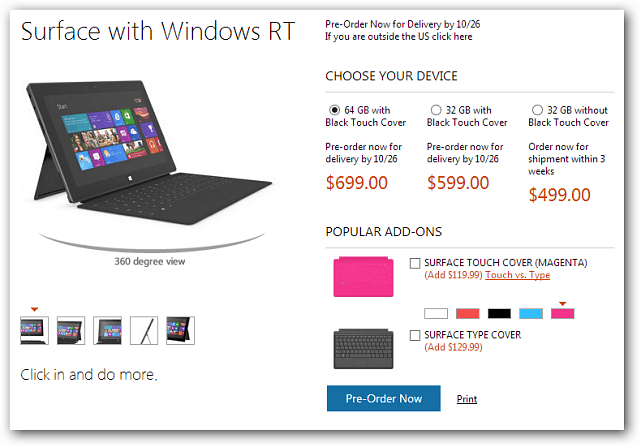 There was a lot of speculation regarding what the price would be. Unfortunately, it’s not the previously rumored cost of $199. Instead, it’s more comparable to Apple’s iPad. Coming in at $499 for the 32GB version for the basic  tablet only model (no keyboard cover). The 32GB model with the attachable keyboard cover will cost you an additional $100 at the official price of $599. And the 64GB model with keyboard comes in at $699.

The price of the Touch and Type Keyboards were also announced — yes, in typical Microsoft fashion there’s two different versions of the keyboard cover. The first is the Touch Cover which is a flat surface keyboard that clicks on to the tablet. The price of it separately is $119.99. Then there’s the Type Cover that’s touted to feel like a real keyboard with raised keys presumably to make productivity work easier. It goes for $129.99 separately.

Both keyboards will be available in five colors – black, white, magenta, cyan and red.

Only the 32 and 64GB models with Touch Cover are available now for pre-order on Microsoft’s site to be delivered on October 26th — the official Windows 8 release date. For the $499 version, there’s a three week delay before shipping. You’ll also be able to purchase a Surface RT from one of Microsoft’s retail stores on October 26th. Will there be lines outside the stores?

In its press release, Microsoft also listed the Surface specs and included apps.