Microsoft is now displaying ads in the Windows 10 built-in Mail app. The ads are already in beta and could start to roll out to everyone.

Microsoft could be bringing ads to its Mail app in Windows 10. The Windows Mail app is the default email app in Windows 10 and, while not great, has improved quite a bit over the years. At the time of this writing, the ads are only displaying for a select set of users without an Office 365 subscription. And they are not coming to everyone – yet.

Today the ads were reported by the Windows news site Aggiornamenti Lumia. And in another report today from The Verge, some users have been seeing ads in the Mail app since this past summer.

You can see how the ads behave in the following tweet from the site Aggiornamenti Lumia:

Bad news: Mail for #Windows10 is getting ads for non-office 365 subscribers! https://t.co/xDELzAClJq pic.twitter.com/gXkQXab5Wr

The ads may appear if you are not an Office 365 subscriber and running version 11605.11029.20059.0 of the Mail and Calendar app. The banner ads will show up when Focused Inbox is enabled in the “Other” section. The ads are equal service offenders. It doesn’t matter if you’re using a Microsoft email account or not. The only way to get rid of the ads is to become an O365 subscriber, which is explained in a large pop-up screen within the app.

This isn’t the first time the company has been annoying with its advertising strategy in Windows 10. Since Windows 10 was initially released, the company has been introducing ads on the Lock Screen, its News app, the Start Menu, and even in File Explorer. The ads are typically for Microsoft products, but it’s irksome behavior nonetheless.

The good news is you can disable a lot of the advertising throughout Windows 10. For example, to turn off ads on the Lock Screen, head to Settings > Personalization > Lock screen and switch them off. 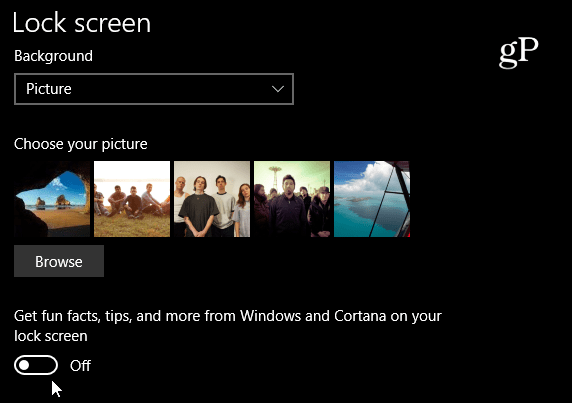 Arguably the most offensive ads started to appear in File Explorer. But you can turn them off by going to Folder Options and disabling the “Show sync provider notifications” option. For full details, read our article on how to disable ads in Windows 10 File Explorer.

The good news is these Mail app ads are currently in a beta pilot program; they may not be coming to everyone at all. According to a Microsoft FAQ, the pilot program tests Brazil, Canada, Australia, and India. If you see them, make sure to express your displeasure in the Feedback Hub to let the developers know nobody wants more ads in Windows 10.

Also, Microsoft’s head of communications, Frank Shaw, tweeted that they were an experiment and are being turned off.

This was an experimental feature that was never intended to be tested broadly and it is being turned off.

Still, Microsoft has implemented ads to help monetize Windows 10 in the past, and we can expect more tests like these in the future. What do you think about Microsoft putting ads into Windows 10 and its apps?