Microsoft today rolled out Windows 10 Redstone 5 Preview Build 17623 to Insiders in the Skip Ahead ring. Here’s a look at what’s new.

In addition to rolling out preview Build 17123 to Insiders in the Fast ring, today Microsoft announced the release of Windows 10 Redstone 5 Build 17623 for Insiders in the Skip Ahead ring. It includes some of the same new features that were added to the Spring Creators Update like the HEIF image format, but also some new features of its own. Here is a look at what’s new and what you can expect.

The High Efficiency Image File Format (HEIF) is included with both RS4 and RS5 builds. According to the post, “HEIF is an image container that leverages modern codecs like HEVC to improve quality, compression, and capabilities compared to earlier formats like JPEG, GIF, and PNG. In addition to traditional single images, HEIF supports encoding image sequences, image collections, auxiliary images like alpha or depth maps, live images & video, audio, and HDR for greater contrast.” For either version, you will need the latest version of the Photos app to test this out.

Safe Remove for External GPUs is a new experience for external GPUs connected via Thunderbolt 3. It will let you know when applications stop using it so it can be safely removed without any data loss.

Privacy and WDAG Improvements are in this build just like have been added to Redstone 4 over the past few weeks. This will allow you to manage privacy settings during the setup process, namely for input settings like Inking &Typing and Find My Device features. The same performance improvements to WADG that were added to Spring Creators Update are in this build, too. This includes the new Download to host feature. 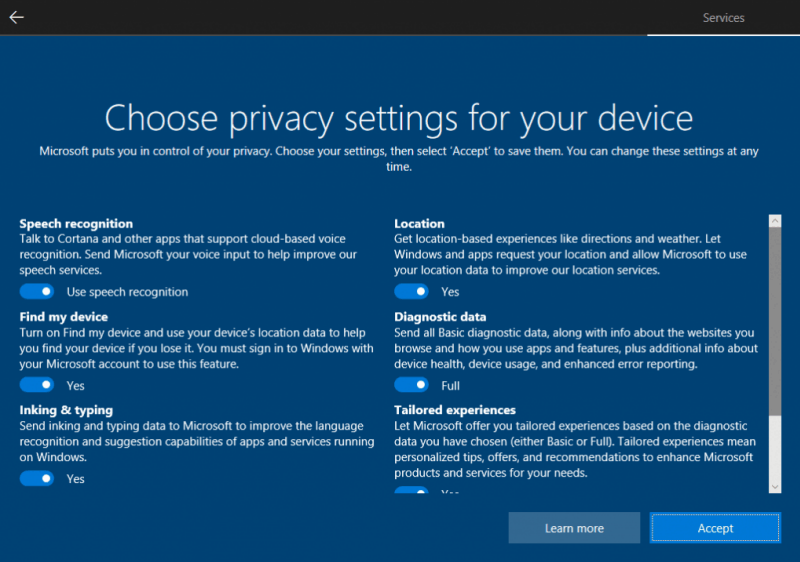 In addition to the changes above, here is a list of other improvements and fixes in this latest build:

As always, there are known issues and other changes for this build. Make sure to read Microsoft’s post to get a full list of all new features, known issues, and developer notes.

Are you an Insider in the Skip Ahead branch or just focused on getting the Spring Creators Update version 1803 settled first? Let us know your thoughts in the comment section below or hop in our Windows 10 Forums for more discussions and troubleshooting help.