Microsoft today announced the availability of its second Windows 10 Preview this week with Build 16275 for Insiders in the Fast ring.

Microsoft today announced the availability of Windows 10 Preview Build 16275 for Insiders in the Fast ring. After a long stretch (three weeks) of not releasing any new builds to Insiders, this release is the second this week. This comes just two days after the release of Build 16273 on Wednesday. The company is getting close to rolling out the stable version of Windows 10 Fall Creators Update in the upcoming weeks. We don’t expect any new features, but Microsoft will be pushing out builds at a faster pace that improve OS quality, fix bugs, and overall stabilization for the final release to the public. 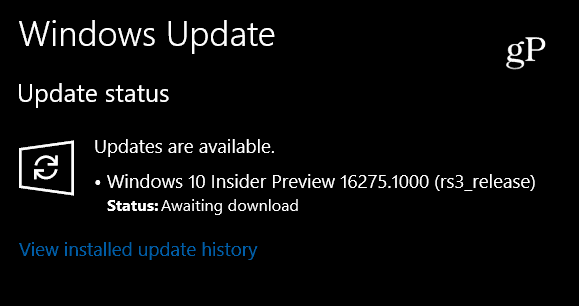 Dona Sarkar notes, “As we mentioned in the blog post for our flight on Wednesday, we are now at the point of the development cycle for the Windows 10 Fall Creators Update where our focus is now on stabilization for release to the world. This means that we intend to release new builds to Insiders more quickly and that these builds will include mostly bug fixes.”

It’s also worth noting that “known issues” will no longer be documented in the release notes. We found that out last week when Senior Program Manager at Microsoft, Brandon LeBlanc, responded to inquiries from Insiders. In a nutshell, he says that since the releases are going to be coming more rapidly in this “stabilization phase”, known issues won’t be included in the documentation unless there is a major issue. Also, if there were to be a major flaw that would render Insider’s PC completely unstable, they wouldn’t release the build at all.

Not missing. Since we're releasing builds more quickly and we're stabilizing, not listing them.

Here’s a look at what has been improved in this incremental new build for PC according to the release notes:

If you are still rocking a Windows Phone as an Insider, Microsoft is rolling out Windows 10 Mobile Build 15245 today, too.

If you’re an Insider and running this latest build, leave a comment below and let us know how things are working (or not working) in the comment section below.