Microsoft announced that it’s introducing a new feature for Cortana that will send reminders about things you said you’d do in emails but forgot about.

Microsoft today announced that it’s introducing a new feature for Cortana that will help you remember things you said you’d do in emails that you forgot to set a reminder for.

We’ve shown you how to set time or location-based reminders with Cortana, and the feature has been available for some time now. However, it’s about to get more sophisticated.

The scenario that we’ve all experienced is telling your boss during the day you’ll have the TPS report for him at the end of the day. Or, if you promise your wife via email you’ll pick up milk on the way home. However, the day goes on, emails and other distractions pile up, and you forget. This Cortana feature is aimed at preventing those forgotten promises by giving you reminder notifications. 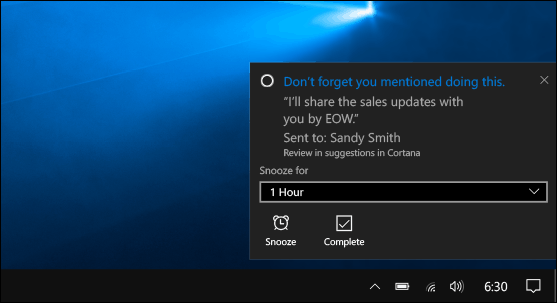 Cortana will ping you with a notification reminding you about items that are time specified.

According to Microsoft’s blog post, everything happens in the background thanks to cloud-based machine learning capabilities.

Cortana does all the work in the background making this helpful feature incredibly easy to use. To get started, simply send emails as you would normally and when you’ll do something, Cortana will recognize that and save the details in a suggested reminder for you. If you’ve specified a deadline in the email, Cortana will ping you before it’s due and save it in the action center. Other suggested reminders will be in the Cortana home.

To set this new feature up, open Cortana and go to Notebook > Connected Services. Then make sure either Outlook.com or Office 365 for work or school account is connected. 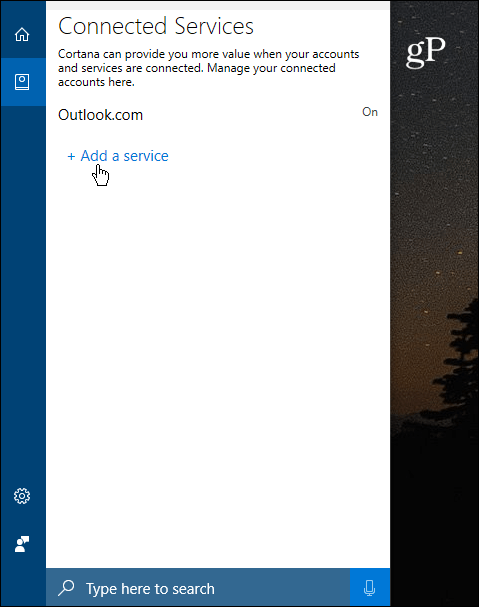 Then to test it out Microsoft says to “Try emailing yourself a commitment like ‘I will send you the report by Friday’ and look out for that suggested reminder from Cortana.”

Because that phrase isn’t time sensitive, you’ll find the reminder in the Cortana Home view shown below where I can set a reminder, view the message, or mark as complete. 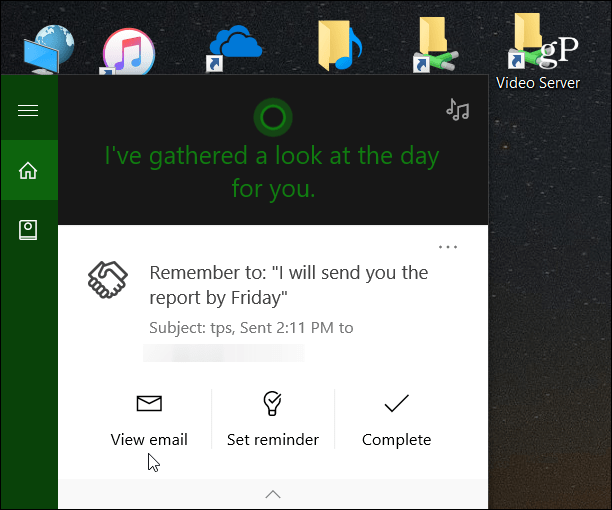 The feature started rolling out today and it currently supports Outlook.com and Office 365 work and school email addresses. Note that you will need to be running Windows 10 version 1607 or newer to use this new functionality. The company says support for other email services is coming soon.

Currently, Cortana suggested reminders are available in the U.S. for Windows 10, and support for other platforms like iOS and Android in the weeks ahead.

Have you received this new feature in Cortana and tried it out? Leave us a comment below and tell how it’s working…or any problems you’re having