Microsoft yesterday released the latest version of the Windows Insider preview for Windows 10 for PC and Mobile, Build 14936.

Microsoft yesterday released the latest version of the Windows Insider preview for Windows 10 for PC and Mobile, Build 14936. This latest version doesn’t offer any major new features but does provide a look at some new Microsoft Edge extensions. 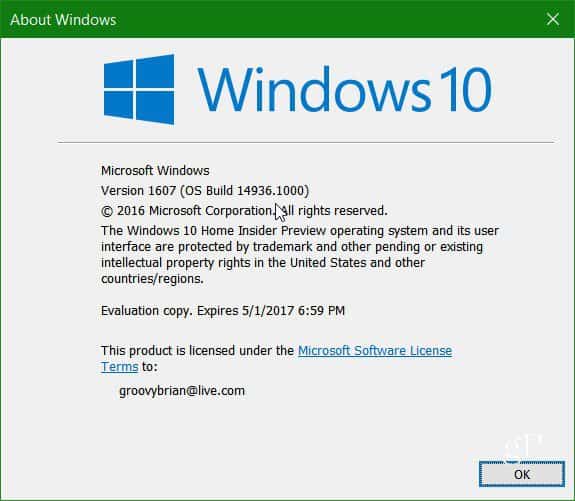 New Edge extensions include the following according to Dona Sakar, the leader of the Insider program:

We have another new release which we need your help testing and giving feedback on before we publish to the general public: Turn Off the Lights is a lightweight and useful add-in designed for a more comfortable video experience. We also need some more help testing our other preview extensions: Tampermonkey is a popular userscript manager that lets users customize the content of pages across the web. Microsoft Personal Shopping Assistant is your smart shopping cart across the web, which collects your browsed products and lets you get price alerts for saved products and compare products between sellers.

WSL will install Ubuntu version 16.04 (Xenial) instead of Ubuntu 14.04 (Trusty) in an upcoming release. This change will apply to Insiders installing new instances (lxrun.exe /install or first run of bash.exe). Existing instances with Trusty will not be upgraded automatically. Users can upgrade their Trusty image to Xenial using the do-release-upgrade command. Full WSL release notes can be found here.


Other Fixes Include the Following:


For more information, including fixes and known issues for Windows 10 Mobile check out the Windows 10 blog post.

Are you an Insider and testing out this latest build? Leave a comment and let us know how things are going.