It’s Patch Tuesday again and Microsoft is rolling out new cumulative updates for all supported versions of Windows 10. Here is a look at what’s included for Windows 10 1809.

Microsoft today is rolling out a new round of cumulative updates for this month’s Patch Tuesday. There are new updates for all supported versions of Windows 10 and Server. The new update for Windows 10 1809 aka “October 2018 Update” is available in the form of KB4494441. Of course, with most cumulative updates, there are no new features to report. But it does include a number of fixes and improvements for the OS. 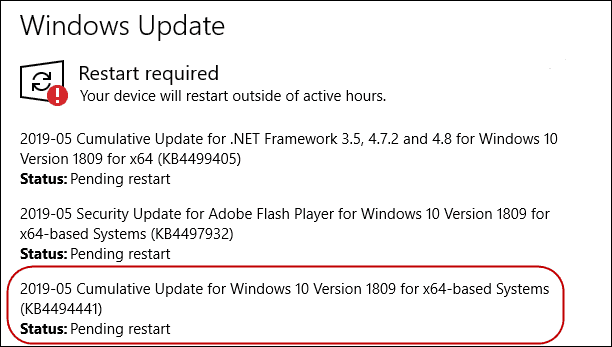 This latest update will bump your build to 17763.503 and includes the following list of fixes and improvements:

All other currently supported versions of Windows 10 are getting cumulative updates today, too. If you have automatic updates installed, you should receive them automatically in the next couple of days. Or, to stay on top of things, head to Settings > Update & Security > Windows Update to check.

Note that there are a few known issues with these updates depending on the version of the version you’re running. Make sure to read Microsoft’s full release notes for possible issues and workarounds.

If you have issues that aren’t resolved with the documented workarounds. Or, the update breaks an app or service, remember you can roll them back. For more on that, read our article on how to uninstall Windows 10 cumulative updates.