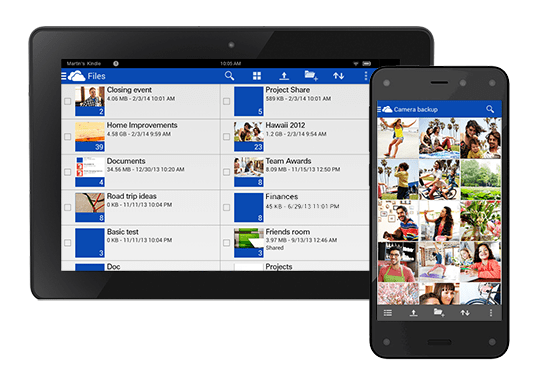 We previously covered how to add OneDrive to major mobile devices such as iOS, Android, and Windows Phone and set it to auto back up your photos. And now it’s been added to Amazon’s heavily customized version of Android on its Fire devices. After you download it, just use it like you would on any other mobile device. Sign in with your Microsoft account and everything will be synced up from all of your other mobile devices and computers.

Not only is OneDrive available on virtually every mobile device, but it’s also available on PCs and Macs as well.

OneDrive has come a long way since it’s initial inception as SkyDrive and has turned into an easy to use and convenient cloud storage service. Microsoft has also been rolling out increased storage space for all users from 7 GB to 15 GB for free accounts and even more for Office 365 subscribers who will receive 1 TB of space.

If you have a Kindle Fire, HD, or HDX or the new Fire Phone, you’ll want to make sure and download this to your device if you’re a OneDrive user.