Microsoft is rolling out a new build of Windows 10 this week. It has over 7,000 improvements compared to the previous one, and you can download it now.

This week Microsoft announced on its Blogging Windows site that it’s rolling out a new build of Windows 10 Technical Preview. The company boasts this build (9860) has over 7,000 improvements and fixes compared to build (9841), and one of the features takes a page from Windows Phone 8.1.

What is currently the most notable built-in feature is the addition of a new notification center which Microsoft is calling Action Center. It gives you basic notifications from system apps, new emails, Facebook posts, Skype contacts, and more.

“So with this build, we’re bringing “Action Center” from Windows Phone over to the PC as the place where you can see and follow up on all actionable items. This build is focused ONLY on enabling basic notifications – quick actions and cleaner UI will come later.” 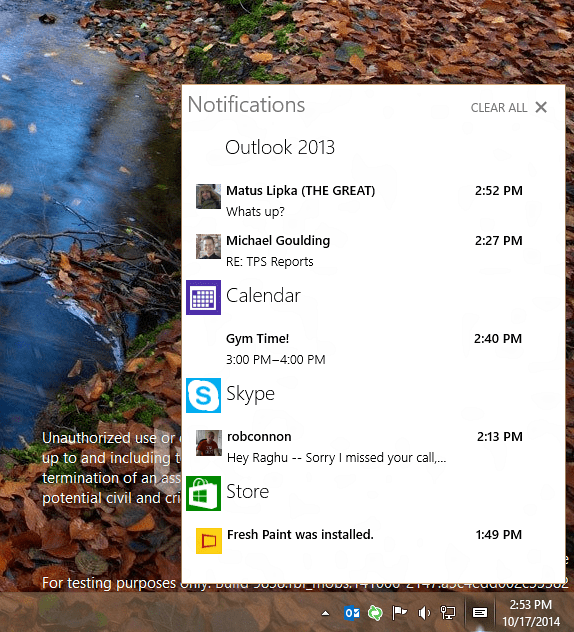 This is what Action Center on Windows Phone 8.1 looks like. You can access this by swiping from the top of you screen down, just like you do on iOS or Android. Not only does it provide notifications, but it lets you turn features on or off like Bluetooth and Wi-Fi. In Settings you can also swap out which actions and notifications are displayed. But it looks like we’ll need to wait a while until more complex options are added to the Windows 10 version. 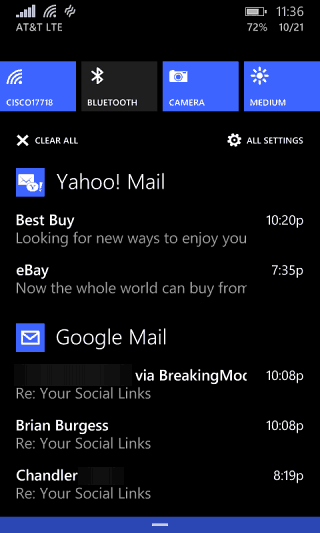 Another feature to note is for those of us with multiple-monitor setups. It’s the ability to move apps easily from one monitor to another by using the keyboard shortcut: Windows Key + Shift + <left or right arrow>.

And the other feature that was added due to user feedback, is animation for switching desktops. We covered the addition of virtual desktops in Windows 10 Tech Preview, and something users have been asking for is adding an animation to make it more apparent when switching from one desktop to another.

I’ve been testing this and to be honest, I don’t see a difference. Either it’s not working with my config or, it’s so subtle of a change that it’s hard to see it.

Installing the build is interesting as it’s more than just a simple Windows update. First, it will take a while to download and install as it’s between 2 or 2.74 GB in size depending on the version you’re downloading.

To find it go to PC Settings > Update and Recovery > Preview Builds and download it. 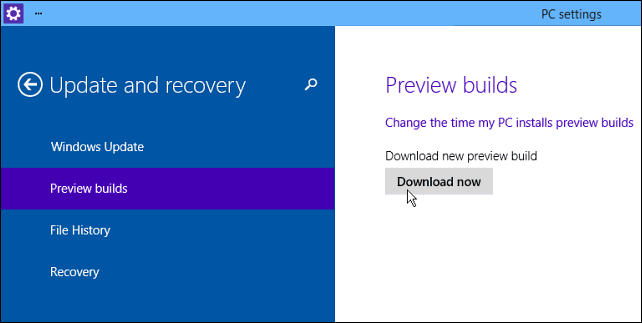 A restart will be required to finish the new build’s installation and I found this interesting screen that allows you to select when your PC will restart. 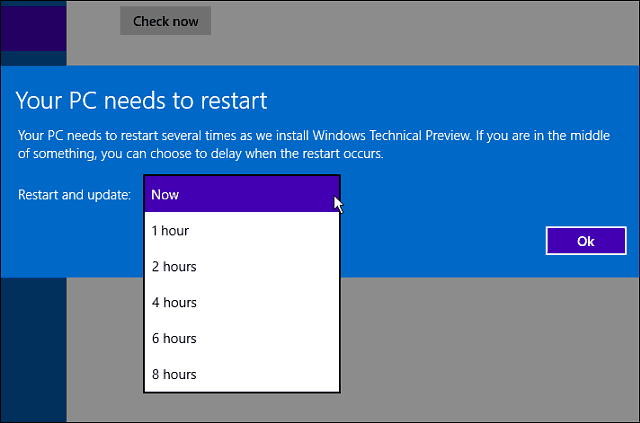 After the restart, your computer will reboot a few times and it will look like it’s going through a new install set up. 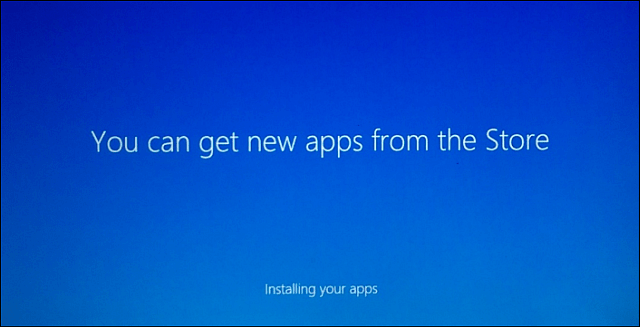 Before wrapping up and getting lost in this new version, I should mention that with this build, you now have the option to get updates more quickly. Go to PC Settings > Update and Recovery > Preview Builds and set the dropdown to Fast to enable updates more quickly. By default everyone is set to Slow, but you can just make the flip to Fast. Just keep in mind, choosing fast can mean you’ll experience more bugs. That being said, what’s the purpose of testing Windows 10 if you’re not seeing the latest code?

Personally, I haven’t had much time to dig into this new build other than get the screenshots for this article. That said, I’ve already seen some minor improvements I like. For example, being able to snap my desktop screens with my mouse. That didn’t work earlier on my system for some reason. Even though Microsoft is touting 7,000 new changes, a lot of those will be under the hood, and minor updates that we should all notice as we continue using the technical preview and continue the journey.

All of us Microsoft enthusiasts are on a journey with this one, and if you would like to get into more in depth conversations about the evolution of Windows 10, make sure and join us in our Windows 10 Forum – it’s free to join and we welcome everyone!