Windows Live Hotmail, the undisputed leader in the online webmail space announced this week that with the release of Apple’s iOS 5, Microsoft is seeing an up-tick in users configuring their devices to sync with its webmail service. According to Microsoft, approximately two million of its 360 million Windows Live Hotmail users have enabled the email service on their iOS 5 devices and that number is growing at a rate of about 100,000 users per day.

Microsoft broke out it’s iOS 5 user base by device in the chart below. It’s interesting but not surprising to see the majority of the iOS 5 user base is using an iPhone 4 or 4S. 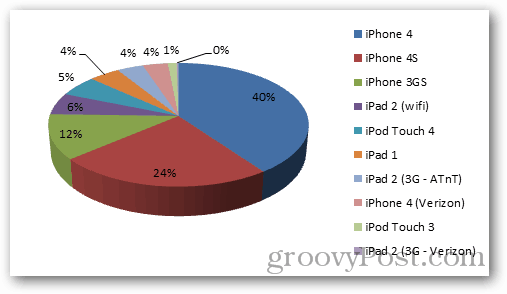 Although many critics may say Microsoft is on the way out VS. Apple, Amazon and Google – this data goes to show that at least in regards its Hotmail service, Microsoft is still very popular and not going anywhere soon.

Microsoft re-emphasized the popularity of its webmail service on its 15th anniversary where it mentioned Microsoft’s continued investment into the service by introducing new features like Active Sync for Mobile devices including easy setup on the iOS devices, significant UI enhancement for Hotmail, HTTPS support, an Outlook 2010 connector and a significant performance update.

Microsoft may be playing catch-up overall on the mobile hardware arena however with billions in cash, record profits, millions if not billions of customers and key alliances – I’m going to guess Microsoft is no where near rolling over and as a consumer, I for one am glad. Competition drives innovation and overall better services and prices for the consumer. Let the battle begin!