Microsoft Launcher 5.0 is now out of beta and it includes a refreshed user interface and now has support for Timeline on Windows 10.

The Microsoft Launcher for Android today was moved out of beta and is available for everyone via the Google Play Store. In addition to a healthy list of updates and improvements, it also includes the ability to sync Windows Timeline between your Windows 10 computer and Android phone. Microsoft introduced Timeline in Windows 10 1803 as a way to display a history of your app and document activity – up to 30 days’ worth of past activities And while you could sync Timeline history between Windows 10 devices, now you can sync it to your phone.

Microsoft Launcher 5.0 has a newly revamped Feed page that includes Glance, News, and your Windows 10 Timeline history. It’s not on by default, but to turn on Timeline support, launch Microsoft Launcher on your phone and head to Launcher Settings > Your Feed and toggle on the Timeline switch. Having it on will sync all your browsing activity between your PC and phone and vice versa. You can also pick up where you left off on documents provided you have Microsoft Office apps installed on your phone. Also, remember that you will need to have Windows 10 1803 or above for your docs and browsing to sync. 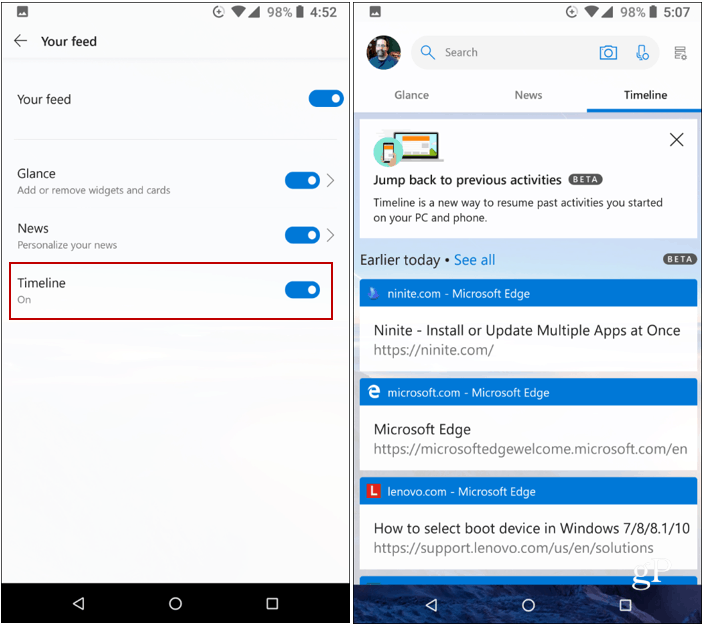 Here is a look at what’s also new with Microsoft Launcher according to the changelog:

Since Apple’s iOS is such a closed system, Microsoft has really embraced Android. There is an Android app to find Microsoft apps for Android easily. And you can also sync photos and texts with the My Phone app (needs 1809 or higher). It’s also worth noting that Microsoft Launcher is a good way for those of us who miss Microsoft’s handsets to make your Android Windows Phone-like.