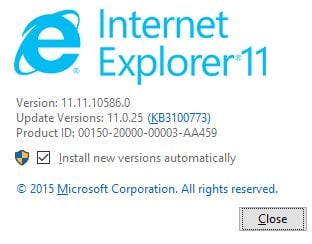 Since July’s launch of Windows 10 which includes a next generation web browser called Microsoft Edge, I have remained a loyal Internet Explorer user. As much as I want to use Edge, I keep slipping back to IE. Twenty years of the same habit is hard to break. It’s still a transition, but I believe I will eventually switch over when it feels right. For now, I am sticking it out with IE 11 which has not gotten much love throughout Windows 10’s development. Microsoft has committed to keeping it around as a compatibility layer for enterprises still stuck on Line of Business web apps that use legacy functions like ActiveX Controls, and remnants of IE 6 code base that can’t transition to the modern web standards of HTML5.

With January 2016, less than a month away, users still using old versions of Internet Explorer will need to start accelerating their move to the latest version to maintain support. Microsoft had made it known as far back as August 2014 that it would be ending support for old versions that are still being actively used. The latest version, IE 11 comes built into Windows 8.1 and up. PC’s running Windows 7 can be updated to IE 11 as a manual download or through Windows Update.

For PC’s running the 2012 release Windows 8.0, with support also ending in January 2016, those PC’s will either need to move to Windows 10 or Windows 8.1 to maintain support. Windows 8.0 came preinstalled with Internet Explorer 10, but no IE 11 download was made available for it or pushed through Windows Update.

Microsoft’s push to get users to the latest version is attributed to the need to reduce developer tensions having to support multiple versions and also remove a lot of the security headaches associated with maintaining support and patching older releases. Although the company’s focus is the new Edge web browser and Windows 10, IE 11 will be with us for some time. It is estimated IE is still in active use by more than 300 million of the more than 1 Billion Windows PCs globally. 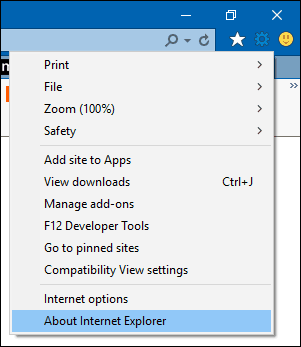 If it says version 11, you are good to go, if not, proceed to download the latest release for your version of Windows here. 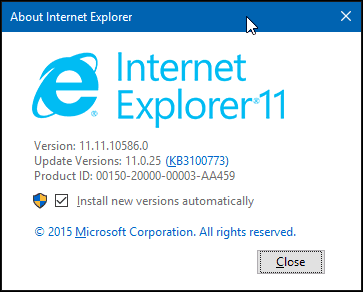