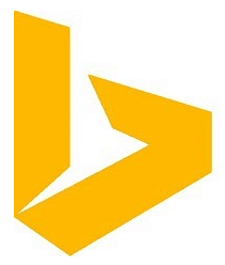 Microsoft launched feature for Bing it calls a “Lyrics experience” and it allows you to see full lyrics for a favorite song on the search results page.

Bing launched what it calls a “Lyrics experience” that allows you to see full lyrics for a favorite song on the search results page. This means no more clicking a third-party site – which usually have a ton of pop-ups and other garbage just to see song lyrics.

In this example, I searched “Blondie Rapture lyrics” and got the beginnings of the song lyrics. Then you can just click See More to see the full song. 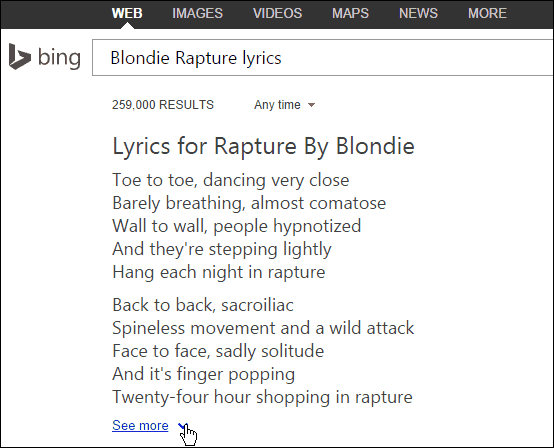 Or in this test I searched for “dream theater pull me under lyrics” and on top of getting the lyrics to the song, it also displays the album the song came from, more information about the song and the band, and related search results. 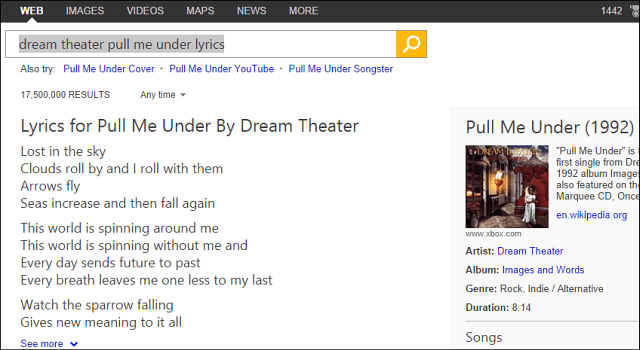 The other cool thing is when you search for a song, you will get other songs from that artist or band, and you can listen to the songs for free via Xbox Music Online. You don’t even need to sign in or have an Xbox Music account for that matter. 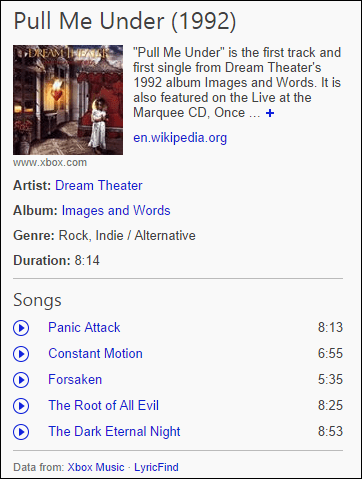 The link will open the online version of Xbox Music to the song you selected. And while you can listen to that song, the whole song too, not just 30 seconds. You’ll also have access to the entire album as well. Not a bad deal!

I also used my Windows Phone 8.1 to search for song lyrics via Cortana, and it also produced the full set of lyrics. On top of that, Cortana can be used to identify playing songs – you don’t even need a third-party app like Shazam. And you have a nice tool for music fans while on the go. 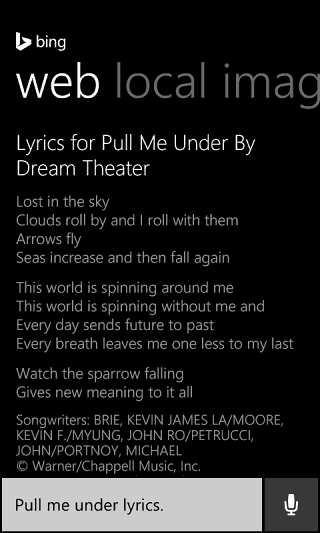 This has been a busy week for Microsoft, it rolled out its revamped MSN site & apps, announced its preview of a new content creating tool in Office 365 called Sway, and of course the biggest news is the release of the Windows 10 Technical Preview.

Of course not every song ever created is available in the database but more are being added on a regular basis.

According to Microsoft’s Bing team:

You can also view the artist, album and other song related information on the snapshot alongside the main search results.

We’re starting out with over half a million songs, and we expect that list to grow in the coming weeks.

Because Windows 10 took most of the spotlight this week, it’s nice to find other cool things the company is doing to make Bing and its other products and services better. If you’re a music fan, this is an interesting gem that you’ll definitely want to try out.