Microsoft is offering a new entry-level convertible PC to it’s Surface family with the new Surface Go which starts at just $399.

Microsoft today announced a new device to its Surface line of devices with the new Surface Go. The new affordable 10-inch tablet will start at only $399 which puts it in competition with other devices aimed at the education market like Apple’s iPad and Google’s Chromebook. It’s the lightest Surface device weighing in at 1.5 pounds with keyboard cover. Here is a look at what you can expect from the new Microsoft device.

The Surface Go is the 2-in-1 convertible tablet/computer the company has been selling for years but is on the low-end of the series of devices. It’s the entry-level model that is meant to replace the 10.8-inch Surface 3 which was introduced in 2015. The main market Microsoft is focusing on with this device is kids, schools, first-line business workers, and anyone who wants a portable small and light tablet. “Surface Go – our smallest, lightest, and most affordable Surface yet,” writes Microsoft exec Panos Panay. “When we designed this device, we had to ask ourselves what people want and need from a 10” Surface. The answers seem obvious – lightweight, productive, and accessible to more people. I’m pumped to introduce you to Surface Go, because it’s all those things, and so much more.” 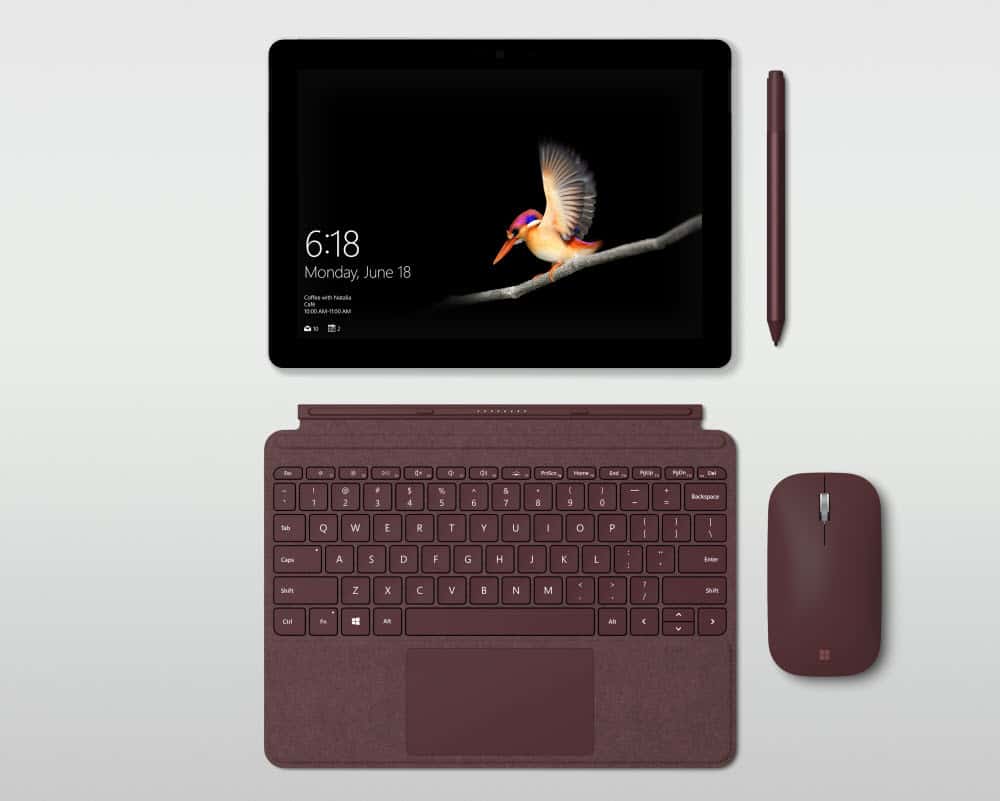 The Surface Go will come with a 7th Generation Intel Pentium Gold Processor 4415Y with fanless design to offer up to nine hours of battery life. You can get models with 4GB RAM and 64GB storage or 8GB RAM and 128GB storage. Of course, storage can be expanded by adding a MicroSD card in the expansion slot. The touch display has a 3:2 aspect ration with 1800 x 1200 pixel resolution and the front-facing camera can be used with Windows Hello facial recognition. It also comes with a  USB-C 3.1 port for data, video, and charging. It will come with Windows 10 S but customers who buy it can upgrade to Windows 10 Home and commercial customers will have the option for Windows 10 Pro. The initial models will only have Wi-Fi connectivity, but the company says there will be a 4G LTE model coming out in the future.

Pricing for the entry model starts at only $399 but that’s just for the tablet. The Type Cover will cost $99 for the basic black one, and $129 for the Alcantara cover. There’s also a portable Surface Mobile Bluetooth mouse that will cost $34.99, and if you want a Surface Pen it goes for $99. The Surface Go will be available for preorder starting on July 10th and will go on sale on August 2nd in the U.S. and a two dozen other markets.

Check out the following video from Microsoft announcing the Surface Go: