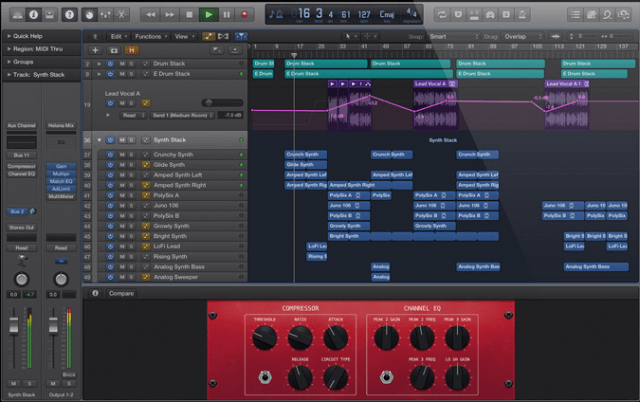 There is no upgrade pricing, but at $200, it’s not a bad deal. The whole package offers a lot, and the fact that you aren’t limited to how many of your computers you can tie it to if you are a single user is also a plus. While there is no particular update that stands out as amazing, I do like the simplified arpeggiator and the pitch corrector. It also adds a new synth, but we haven’t heard it for ourselves yet. It looks very simple though.

Here is a list of the new features in Logic Pro X:

Drummer: This is ideal for solo musicians who don’t like to program or write drum parts. It’s a studio drummer-type plugin that will create drum parts across a variety of styles.

Flex Pitch: Basically a pitch corrector. If you sing a part, or play something, but the performance isn’t perfect, say you miss a note, you can just have Flex Pitch correct the minor mess-up instead of having to do a retake. These types of plugins have gotten better over the years, and they can be used for interesting effects (just, please, not the overused “T-Pain” effect.) It’s something I’ve wanted in Logic for some time already.

Logic Remote: This just lets you control Logic from your iPad. Very convenient.

Vintage Keyboards: Piano, Organ and Clav. models for your music.

Track Stacks: Another great feature. If you are like me, you separate your individual drums: kick, snare, high hats, etc. into separate tracks. This can really start to jack up the track count onscreen. Stacks will gather all those into one track to help visually simplify things. This isn’t a permanent change. You can open up the stack if you need to make additional adjustments.

Smart Controls: Not entirely sure how this works, but Apple’s product page says this: Smart Controls are innovative new sound-shaping tools that let you make simple or elaborate creative changes without having to dive into multiple plug-in interfaces. A single Smart Control can adjust several plug-in parameters at once, so it’s much easier to create complex transformations. And Smart Control mappings can be customized to suit your workflow — just choose from a variety of themed knobs, buttons, and backplates to reflect the type of instruments or effects being controlled.

Aside from that the Logic mixer has been updated. Moving plugins around no longer requires a modifier key, and things are changed to provide a better sense of the signal flow.

Logic has been my DAW of choice for quite some time now. It’s a great piece of software, and it’s just what I’m used to. In fact, after you download and install it, you’ll need to continue to kick back while 2GB worth of studio quality samples and loops are downloaded for your use. Now, if I only had an extra $200.

You can check it out here.

Don’t forget to check out my ongoing home studio series for learning how to use these awesome music making tools!