Apple follows up the recent iOS 11.2 mega update with a minor one with fixes for its Home app. Find out whats inside and if you should upgrade.

After last week’s mega 11.2 iOS update, Apple follows up with a minor 11.2.1 fix. The new update primarily targets users of the Home app, which manages smart home fixtures (lighting, door locks). Apple says a bug was discovered that could disable remote access to shared users of the app.

Apart from that, there is not much else to tell, so, this looks like a last minute discovery that possibly did not make it into 11.2. Apple suffered a terrible week of bugs and disclosures in iOS 11 a couple weeks ago. The mobile OS launched in last September and has since received eight updates. This is starting to look like the beginning of a new trend of frequent updates.

The new 11.2.1 update for iOS applies to iPhone 5s and later, iPad Air and later, and iPod touch 6th 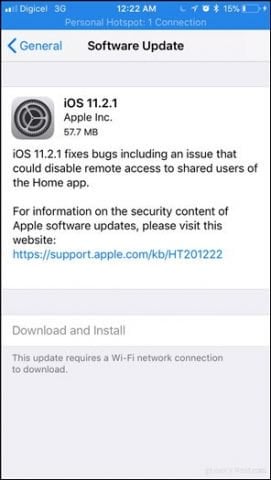 generation. Users can download the update by opening Settings > General > Software Update. Version 11.2.1 is quite small, coming in at around 57.7 MBs.

So, users should be able to download it quickly. I don’t know why Apple won’t allow small updates like this one over cellular if the user chooses to do so. I have downloaded apps larger than 11.2.1 with little effect on my data plan. Here are some more details about the update.

Impact: A remote attacker may be able to unexpectedly alter application state

If you are all in on Apple’s ecosystem, this is an important update to get; especially since it concerns HomeKit. Apple’s 11.2 updates included a number of important features, such as Apple Pay Cash, which competes with similar services such as Square or Venmo. The service utilizes the built-in Messages app so you can easily make peer-to-peer payments. Faster wireless charging also made its debut in the 11.2 update, but that’s an exclusive for the new iPhone 8 and X devices. You will now be able to charge your device even faster using the 7.5w charging speed.

On a related note, I recently updated my iPhone 6s over the weekend to 11.2 and was surprised how long the process took. The installation seemed to fail and recover at one point, but eventually, it did complete successfully. I don’t know if this is a sign of device age but it certainly left me a bit disturbed.

Let us know the comments how you have been dealing with this rapid succession of updates from Apple.