Hyperlapse, according to Instagram, is a “built-in stabilization technology that lets you create moving, handheld time lapses that result in a cinematic look, quality and feel—a feat that has previously only been possible with expensive equipment.”

In a nutshell, you can record videos even with jittery hands in Hyperlapse and transform it into smooth time lapse pieces that have a “cinematic” feel. Unfortunately, Hyperlapse won’t be available for Android anytime soon.

If you want to know how to create time lapse videos using your Android device without Instagram’s Hyperlapse, here are three excellent apps to do just that.

Framelapse is a full-featured video recording app designed specifically for time lapse effects. Recorded video is in mp4 which can be played in most devices. Here are some of its many features:

Check out the app’s video below:

A paid version of the app gives you these added features:

Lapse It is one of the pioneer apps for shooting time lapse videos, and have earned favorable reviews from PCWorld and Appstorm. Unlike Framelapse, Lapse It allows you to create new time lapse videos from existing clips in your gallery. You can even import image sequences from a DSLR camera to create a high definition time lapse video.

Here are more of its features:

If you don’t want to spend a lot of time recording videos of slow-moving objects, you can use Timelapse instead. This app is great for collecting a series of photos in your gallery and turning them into a high definition time lapse video. 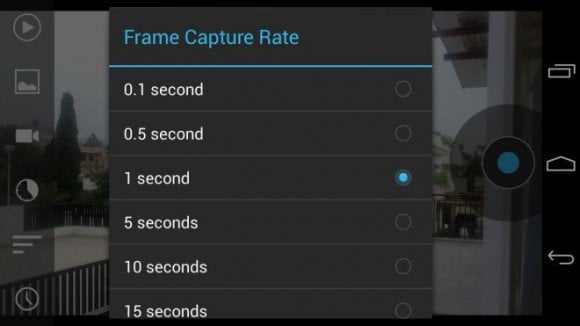 All three apps are free in the Play Store, although Framelapse and Lapse It have paid versions with more features.

Have you tried a similar app for creating time lapse videos? Share in the comments!