Last Friday we ran a poll and asked What is Your Favorite or Default Web Browser. The results are interesting. Firefox and Google Chrome were neck and neck with Firefox sneaking out the victory.

Here are the results. Out of 179 votes, Firefox won a modest victory with 35.48% of the votes. Google Chrome had a respectable second place showing with 33.33 percent. Internet Explorer was third with 15.05 percent and Safari nabbing the fourth spot with 7.53 percent. 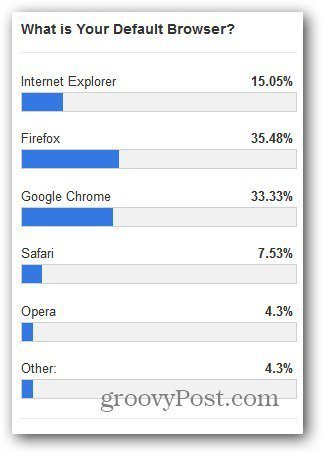 The competition between Firefox and Chrome from our poll are akin to national statistics. According to NetMarketShare, Chrome and Firefox are currently running in a tight race. Where our poll did not correlate with national browser statistics is with the dominance of Internet Explorer. In the corporate world, many proprietary business applications only work with IE, so employees are required to use it.

Here’s what some of you said about the browser you use.

Of course, this poll was completely unscientific and if we held it longer, Chrome may very well have won. As the Internet and browsers continue to evolve we’ll likely see major shifts in the type of browsers people use. Remember back in the 90’s IE and Netscape were the two top browsers.