Ubisoft hasn’t said a word about its once widely expected  I Am Alive plans for a good year or more now. Despite amazing trailers it showed for the game in 2009, the game’s been in development for way too long. Most gamers figured Ubisoft killed it.

But no! Today, maker UbiSoft announced plans to roll out the first-person shooter for the holidays. The game takes place in a future Earthquake ruined Chicago. Today, the company re-announced I Am Alive and posted this new trailer on YouTube. Take a gander.

No PC version is on the docket, says Ubisoft, but the game will arrive for Xbox Live Arcade the the PlayStation Network by Christmas, an exec told groovyPost.

As for the wait: “We know people have been waiting for this game to arrive, and we believe it’s going to be worth the wait,” said Ubisoft marketing director Adam Novickas in a statement. “I Am Alive presents a unique take on the post-apocalyptic, survival genre by creating more complex and emotional situations for the player. Xbox LIVE Arcade and PlayStation Network are the perfect platforms to leverage the mature and challenging experiences of the game.”

And in other news, I’m thinking about gaming steals and deals this week. It’s getting time to start holiday shopping and with sites like Steem offering pretty amazing discounts on popular standards in multiple genres, buying a bunch of nice and affordable games for gifts now might save some time later. And money, too.

Here’s what Steem has up this weekend. These weekend deals end Monday, October 3, at 10 a.m. Pacific Time. 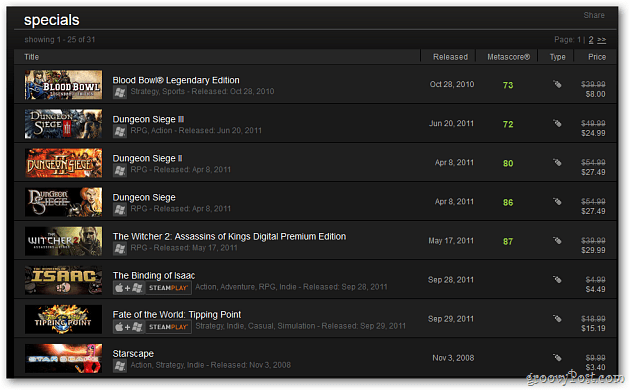 This game makes a dandy gift. Ever played it?

To run Dungeon III, you need 4G free on your Windows 7 (recommended) Intel Core i5 GHz or equivalent PC.

And finally, check your watch! You’ve got fewer than 10 hours to grab one of my favorite games from 2003, Monopod’s Starscape. Love the female heroine. This one will run on most decent Pentium 3 or better systems.

That’s it for Thursday’s Groovy Gaming News wrap — plus some steals. Gotta run!