Google has demoed Project Glass at its Google I/O event, and it was spectacular. Read more about the event and watch a video of the extreme presentation.

Google has made a serious demonstration of showmanship at its Google I/O event, by showing some of the possibilities of Google Project Glass, via a hangout in Air, as it was called. 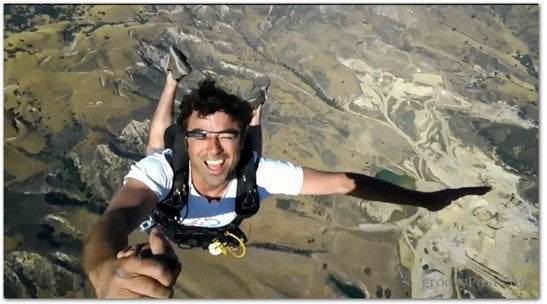 What’s that, you ask? Well, imagine the fact that Google founder Sergey Brin (who was in the event hall with the attendees), was having a live Google Hangout with a few skydivers. All of them were wearing Glass devices while they jumped off a plane and were followed by bikers doing stunts on the roof and, eventually, getting into the hall.

The groovy part was that everyone could see the whole thing through their eyes, using the Google glasses. The video below (captured by CNET) will show you how it all went, and I can tell you it’s absolutely spectacular. I mean, it looks like the glasses can only display images and videos, as well as stream video and sound at the moment (plus, they can take pictures), but it’s a serious step in the right direction. The fact that video streaming worked as well as it did could mean good things (although additional hardware could have been used –  I’m not saying it was).

According to USA Today, Google is counting on developers to develop software that could unlock the full potential of the glasses. That’s why Google has offered the glasses to developers at the event for $1500. According to the same source, the plan is to have them available next year.

I think the glasses do show some serious promise and I hope I’ll get my hands on a pair soon.