Google announced at its annual Google I/O 2016 conference that Google Play store will make an appearance on the company’s Chrome OS.

Google announced at its annual Google I/O 2016 conference that the Google Play store would make an appearance on the company’s Chrome OS. This means that Chromebook owners will get a chance to download their favorite Android apps on their devices and run them on a bigger screen, whether it’s an app like Skype or a game. 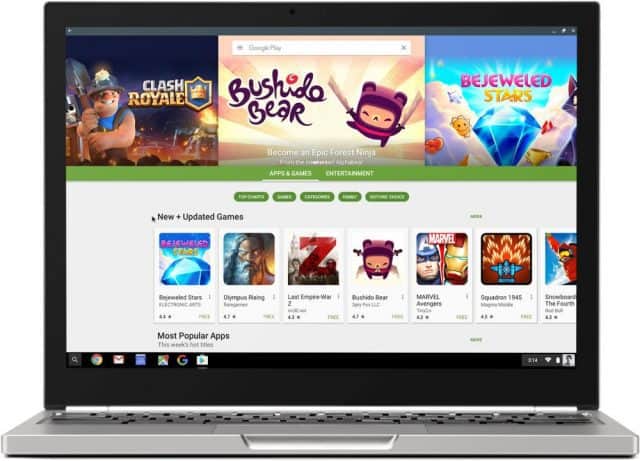 We’re bringing Google Play (the most popular app store in the world) to Chromebooks. This means you’ll be able to download and use Android apps, so you can make a Skype call, work with Office files and be productive offline — or take a break with games like Minecraft, Hearthstone or Clash of Clans. The same apps that run on phones and tablets can now run on Chromebooks without compromising their speed, simplicity or security.

Starting next month, Google Play Store will roll out on the ASUS Chromebook Flip, the Acer Chromebook R 11 and the latest Chromebook Pixel. It’s worth mentioning here that not every single Chromebook out in the wild will be able to run the Play Store. If you’re interested, the search engine giant also revealed the complete list of Chromebooks, which will get the Play Store later this year — the list includes a majority of Chromebooks released.

The company also mentioned that it’s working with the hardware partners to introduce more exciting devices expressly designed for the Play Store. We’ll update you as soon as we hear any other information about the new Chromebooks so stay tuned.