Following the release of Google Maps for iOS, users have been downloading the app in order to replace Apple’s Map App. Here’s all the details.

Ever since Apple pulled support for Google Maps when it released iOS 6, it’s been a thorn in the side for map users as Apple’s Maps application was nowhere near ready for primetime. Nearly every iOS maps user has been praying to the tech gods for Google to finally release their dedicated Google Maps application, which occurred just a few days ago. After the application showed up in the App Store, it shot up the charts and became the most downloaded free application in record time. 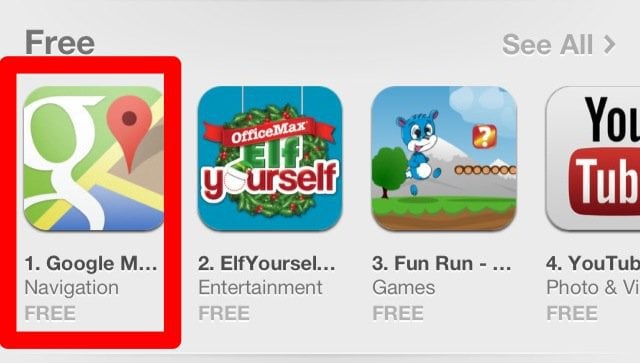 But what kind of download numbers did Google Maps receive?

“We’re excited for the positive reception of Google Maps for iPhone around the world,” Huber said. “Congratulations to the Maps Team on the recognition for the passion and hard work they poured into it, for this release and over the last 7+ years.”

As of this writing, Google Maps is still sitting atop the App Store’s Top Charts in the Free category along with “ElfYourSelf,” “Fun Run – Multiplayer Race” and the fourth application being another Google-owned app, YouTube. When you consider how many people will be receiving an iOS device over the holidays, we’re sure Google Maps will stay at the top of the Top Charts once those people realize just how terrible Apple’s Maps application is.

Apple’s Maps  App will be receiving some improvements in its upcoming iOS 6.1 release, but at this point, whatever Apple does to improve its Maps application will be too little, too late, especially now that Google Maps has its own dedicate application on iOS.