Gmail is going to get a massive overhaul of its user interface. Here is a look at what you can expect.

With the release of Google+, it appears Google is on a mission to remake its social brand and its entire product suite. Google kicked off its remake with a blog post announcing the three founding design principles its design will be based on.

In the announcement, Chris Wiggins, Creative Director at Google, said we should expect to see the new designs roll across all Google services over the next few months. True to his word, later that day, the Gmail team announced new themes, which they made available to preview the new Gmail look. The new themes focus on “stripping out the unnecessary clutter and making Gmail as beautiful as it is powerful.” Google Apps, the enterprise side of the Apps Suite, made a similar announcement introducing a new Look-and-Feel Page with an FAQ about the new look.

After enabling the new Preview theme on my Gmail account, my first thought was – “Oh, this looks exactly like my Google+ account.” So although the consistency was not a foundation design principle, it most definitely falls into the category of effortlessness. Here’s a before and after shot of my Spam folder in Gmail sporting the new UI. 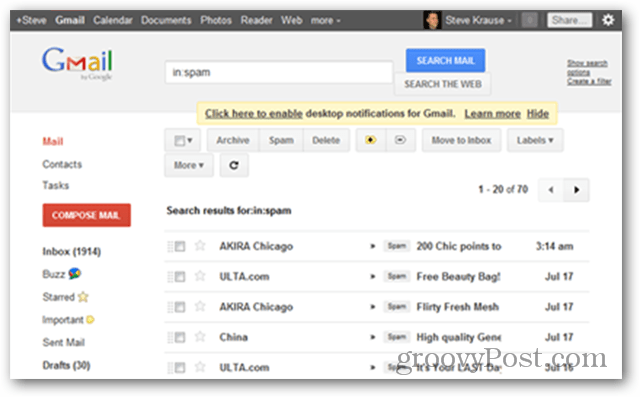 For years, the UI has always been my largest complaint with Google services. The Google team has always put function over look-and-feel. I’m excited to see Google’s engineers finally investing in the UI by hiring a few designers to finish its products. If it can execute on its new plan and bring a consistent, clean new UI across its platform, it will definitely turn up the heat with its cloud rivals, Apple and Microsoft.