If you’re a Google Chromecast owner, things just picked up in time for the long weekend as the device has gained seven new apps including TuneIn support for thousands of international radio stations and millions of Podcasts.

According to a post on the Google Chrome Blog today, Chromecast is adding seven more apps including Comedy Central, Sesame Street Go, Nickelodeon, EPIX, YuppTV and ENCORE Play. All of these apps, sans TuneIn, will require you to have a cable subscription to access their on-demand shows.

And one of those allows you to stream broadcasts from over 100,000 radio stations, and millions of Podcasts with the TuneIn Radio app. The TuneIn app is available on mobile devices, and it’s worth noting you can also get it on the Nexus Player too. At the time of this writing, TuneIn is the only app announced today that you can install directly on the Nexus Player.

Remember too, that the Nexus Player is compatible with the “Google Cast” technology, you can stream any of the content from today’s announced apps to it.

TuneIn is also doing a promotion on Twitter for the event and is giving away five Chromecasts if you retweet its post. 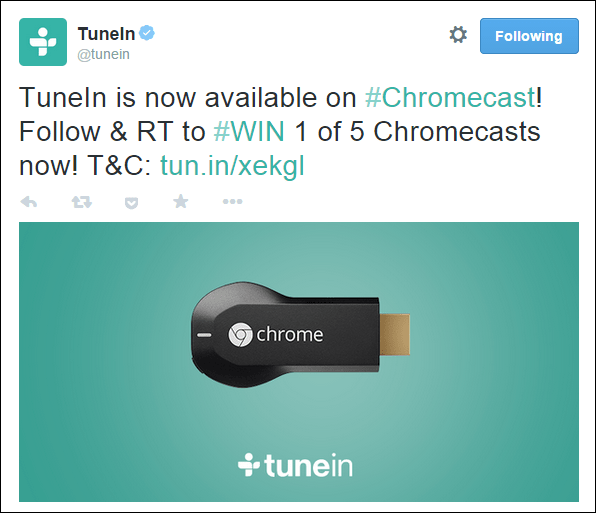 Which of these apps are you most excited to start using with your Chromecast or Nexus Player (If you have one)? Leave a comment below and tell us about it.