Google announced Guest Mode for the Chromecast which allows friends to connect to your Chromecast without having to access your Wi-Fi password.

Google announced Guest Mode for the Chromecast, a new feature for the $35 streaming stick. Guest Mode allows friends to connect to your Chromecast without having to access your Wi-Fi password whenever they want to show content from their phone on your TV.

After enabling guest mode, your Chromecast emits a Wi-Fi beacon that other devices use to find it. The feature is opt-in, and you can turn it off if you don’t want someone using it.

The beacon is an audio tone that humans can’t hear containing the connection PIN to the other Android devices in the room. If the audio pairing fails for some reason, you can still manually enter in the PIN, which shows up in a couple of places.

To turn on guest mode, launch the Chromecast app on your smartphone or tablet running Android 4.3 or above (iOS is not supported) and select Devices, your Chromecast, and then slide Guest Mode on. 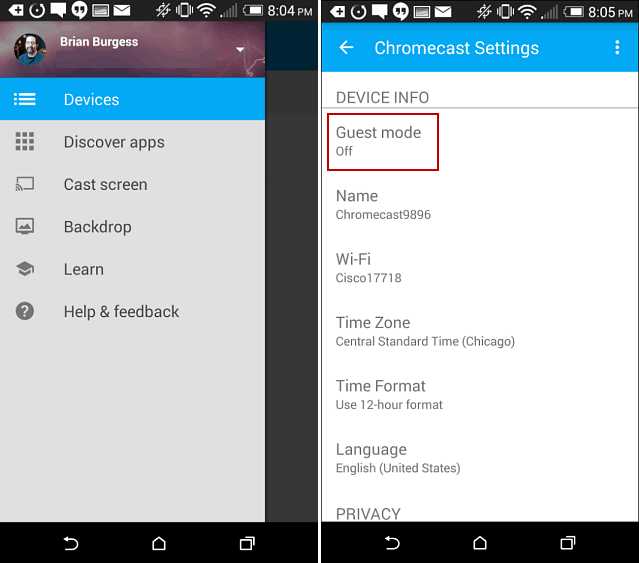 That’s all there is to it. Now your friends will be able to cast pictures, videos, and music from their Android device without having to join your home network.

The four-digit PIN will display on the screen – the Chromecast Backdrop – which you’ll need to enter manually if the audio pairing doesn’t work. As far as the PIN goes, it’s worth noting that it will reset every 24 hours or if the Chromecast is rebooted. 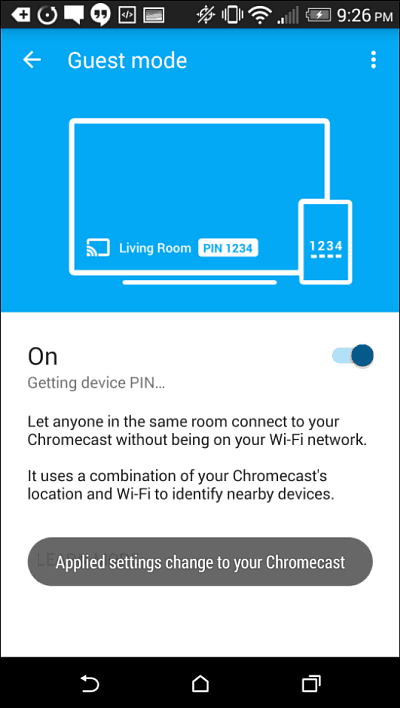 This update also comes with a few more additions, including some design changes, a new app icon, and the ability to screencast any device running Android 4.4.2 (KitKat) or higher. While the ability to mirror your screen has been available for some devices, this update increased the number of supported devices.