Google Chrome, one of the world’s most popular browsers, now has an Android version. Unfortunately, it’s not for everyone – only users from 12 countries, running Android 4.0, Ice Cream Sandwich, can use it. Hopefully, just for now. 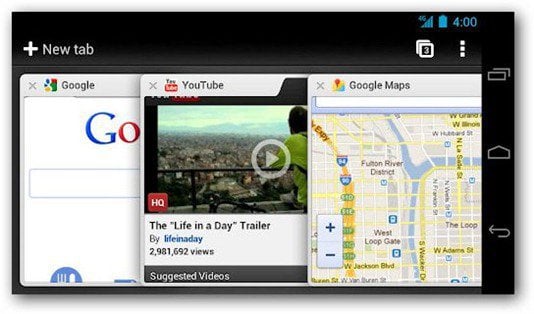 I’m certain that the number of countries in which it will be available will expand quickly, but I strongly hope that it will be available for older Android versions, too. Not doing that would mean Google would limit its own user base, even if the number of ICS smartphones and tablets (like the Asus Transformer Prime) is on the rise. It also seems plausible that Google will replace the stock Android browser with Chrome sooner or later (no reason developing two at a time, is there?)

The new browser promises a faster mobile browsing experience, with search results loaded in the background (basically, you get search suggestions, just like you do on the desktop version). You can also flip very easily through open tabs, which is quite groovy.

It also makes selecting links easier, by zooming in on links which are next to each other.

Signing in will allow features like bookmark syncing, as well as opening the tabs you have opened on the computer, so you can continue browsing.

The incognito mode is also available on the new browser.

You can search for Chrome on the Android Market on your mobile device, or just click here and install it via the desktop version of the Android Market. Do remember, though, that it’s only available for you if you live in one of the following countries: United States, Canada, United Kingdom, France, Germany, Spain, Australia, Japan, Korea, Mexico, Argentina and Brazil.

Check out a short presentation video of the new browser below.